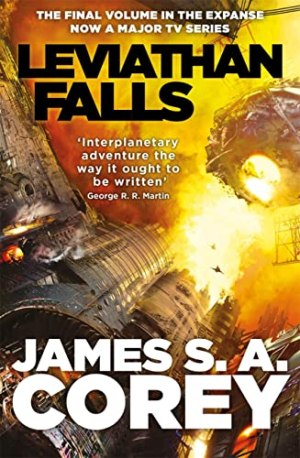 The Laconian Empire is in disarray after the loss of their leader. But Duarte is far from dead, and the disparate factions of humanity may yet face even greater dangers. For humanity has caught the attention of something ancient, and powerful beyond belief . . .

Over the past decade, The Expanse has quite rightly come to be recognised as one of the best modern science fiction series. It’s spawned a massively successful television adaptation, a role-playing game, and more. Now, with this ninth volume, the saga that started it all comes to a close. And it’s a finale laden with expectations. Which of humanity’s factions will emerge triumphant? Will the Rocinante‘s crew emerge unscathed? And will the mysterious aliens who wiped out the ring builders return to do the same to humanity? Leviathan Falls pulls on thread from across the previous eight novels, and some of the short stories, and in a little over five hundred pages, wraps it all up. Mostly.

As with previous novels, the action is split between a number of viewpoints, and Leviathan Falls has more than any of the previous books. Some familiar, some new. In fact, there are characters in this book I hadn’t been expecting to make a comeback, but they certainly are welcome ones. There are a few chapters that break this pattern, however, with interludes for ‘The Dreamer,’ and then there’s ‘The Lighthouse and the Keeper’ which is one of the most interesting chapters in the entire saga. But even though they do break the established rules of PoV chapters, it all makes sense in context. Trust me on that. More to the point. trust Corey. They know what they’re doing.

Of all the characters in Leviathan Falls, my personal favourite is Laconian officer Tanaka. Adding in a completely new PoV this late in the game is a risk, but with Tanaka it pays off. It’s important to have a character who has not been intimately involved in the events of other books, some one who, though more than capable and worldly, is naive when it comes to protomolecular matters. In many ways, Tanaka is the human embodiment of Laconia. yes, she’s doing what she thinks is bets for humanity, but she goes about achieving that goal in the most ruthless and brutal of ways. That coldness is a strong counterpoint to the warmth of the newly reunited Rocinante crew, who are of course their usual, excellent selves. A special mention should be made of Alex Kamal, who here gets the fitting send of that the TV adaptation is unable to do. In fact, every character gets a proper resolution, which is no mean feat when there are so many of them.

The strange thing about Leviathan Falls is that for most of the book it doesn’t feel climactic. To use the local parlance, it’s a slow burn. Those expecting an explosion-fuelled final battle are likely to come away disappointed. The same goes for those seeking answers, and Duarte’s promised war in heaven. The nature of humanity’s alien enemy is left fairly mysterious. At the end of it all, we know what they are, and why they do what they do. But they are a threat rather than a feature of this story. The focus, as it always has been, is on humanity. It’s telling that the final scenes are not about war and death, but about relationships, and the bonds we make between each other. For a long period in the middle of this book, I thought the story was going down a route that left me disappointed, heading for one of my most hated tropes. But in the end, I felt nothing but satisfaction.

Leviathan Falls is a fitting capstone to one of the finest science fiction sagas ever put to print. Yes, there have been bumps along the way, but if this is where we leave things, then the journey was truly worthwhile.