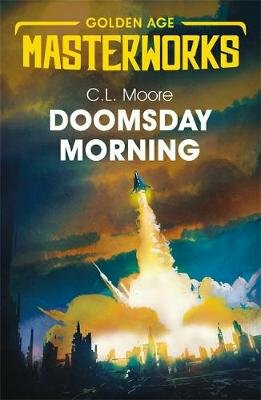 In the wake of a nuclear war, the United States have been reborn under Comus.

Once a communications service, now a tyrannical police state, Comus is held together by a single man: Its creator, Andrew Raleigh. Life under Comus is hard, but peaceful. Only in california is there open resisitance to the new order of things.

But Raleigh is dying, and fears Comus will die with him. Seeking to root out the rebels in California, Comus recruits retired actor Howard Rohan to its cause, sending him deep into enemy territory on a mission of espionage. But Rohan is nobody’s fool, and his allegiances are his own . . .

Doomsday Morning does a lot of things very well. Moore doesn’t spend too much time in the Comus-controlled regions before sending Rohan on his journey, but the impression left by those early chapters is a lasting one. Comus’s influence and presence are evident everywhere, from the red-suited police to the Prowlers and Hedgehopper machines. One of the most memorable scenes involves the theft of a hedgehopper, and it’s as action-fuelled and explosive as anything Michael Bay could dream up, and far more tense besides.

Comus itself is wonderfully presented. While there is no doubt that humans are suffering under its influence, there is a perfectly valid argument in favour of keeping it around. After all, isn’t a little individual suffering a reasonable price for national peace? This isn’t a black-and-white dystopia like so many modern YA offers. No, Moore has crafted something more nuanced. Better in every sense. It s not the system itself that is at fault, but the abuses of those who would control it.

Where Doomsday Morning left me cold was in the actual plotting. For such a short novel, there is an awful lot of Rohan and his troupe wandering around the Californian ruins, putting on plays and getting into scrapes. Perhaps as an artefact of serialisation, it’s almost episodic, and the individual parts don’t quite line up as neatly as perhaps they should.

Despite this, the climax is a rousing one. Like all rebellions, there are losses. Both personnel and moral high ground sacrificed for the benefit of the cause. While he is far from heroic, it’s hard not to root for Rohan as he finally stops dithering and chooses a side.

All told, a strong novel. if you can look past the disjointed middle act, you’ll find a dystopia that, six decades later, looks more plausible than ever.