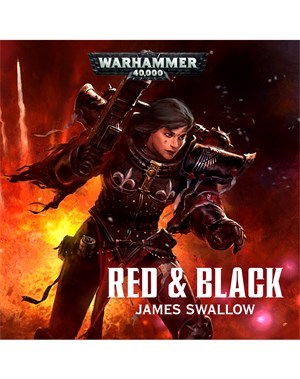 I’m generally not a fan of audiobooks. For non-fiction I think they’re great. After all, who doesn’t love a good documentary? But for fiction they’ve always seemed a little slow for my tastes. Audio dramas, on the other hand . . . Those are very much my jam. In the past year or so I’ve got really into Black Library’s audio, which is generally a blend of narration and drama, complete with bolter blast and warp sizzle. At around an hour or so in length, they’re a perfect shot of adrenaline for a late night or early morning listen. They’re also showcases for some of the best writers and performers in the field today.

Red & Black tells the story of a Sister of Battle sent to investigate a remote world that wants admittance to the Imperium of Mankind. For those uninitiated in the deep lore of Warhammer 40,000, allow me to translate. A female crusader for a xenophobic empire is tasked with bringing a lost colony under the heel of the Empire’s oppressive regime. Naturally, it goes about as well as you’d expect. You don’t need to know all of the lore to make sense of the story, but knowing it will add extra layers to the narrative.

One thing that the Black Library audio productions are brilliant at is examining the smaller stories of the 40,000 universe. This isn’t the sprawling expanse of the Horus heresy. It’s tighter, more intimate, and the better for it. With such a small cast (there are side roles from uncredited performers) you really get a sense of all the characters involved, even in such a short span of time. Bowerman and Chalmers are both at the top of their game, mining their parts for all they’re worth. Even the bit parts of the other Sisters are well drawn from only a handful of lines.

As you’d expect of such a short production, the story is a fairly simple one, and what comes as a shock to the characters is an expected twist to someone experienced with the universe. Because of course, good things simply do not happen in the grim, dark future. But while it doesn’t break the formula, Red & Black has fun with it. It’s a piece more about the interplay between characters than the events. Each working their own agenda, and the conflict between them is as tense as it is well-realised.

I have to give credit to the Black Library sound team as well. From the ominous music to the roar of crowds, the ambient sound is spot on throughout. Close your eyes and you can almost feel the world growing around you. Every shot that is fired comes as a brutal, physically perceptible shock. And there are a lot of shocks fired. This is an audio that gets the blood pumping, and not one I’d recommend listening to on the morning commute. if you can, you should avoid all distractions and just relish in the production.

So while it is a little more lore-intensive than some other releases, Red & Black is one of the more action-packed stories Black Library have released, and it’s definitely worth a listen.