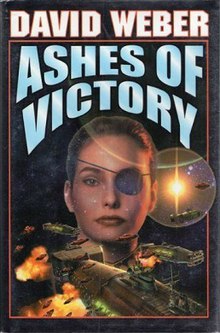 The war between Manticore and Haven drags on, with both sides nearing breaking point. With the return of the legendary Honor Harrington, Manticore’s morale receives the boost that could just win them the war. But in war, can there be any real winner . . ?

Ashes of Victory is a novel about consequences. The most obvious example is the Havenites’ staged execution of Honor coming back to bite them. It can be awkward, having a dead woman escaping from your forces, and the embarrassment is a very public one. Manticore too must face the results of decisions it made based on the false evidence. Honor’s titles have been redistributed, her posthumous legacy set in stone. And of course, her family must reconcile their grief with newfound hope. Actions have fallout on both sides, which is always good to see.

This is a slower book than many in the series, with the focus being on recovery rather than action. We take time to see how people on both sides are facing the ongoing war. From soldiers to politicians, and families to civilians. It’s this wide-cast net that separates the Honor Harrington series from other series like it. The wide scope that shows an entire universe, not just a handful of main characters.

However, just as the eleven-year war between stellar nations grinds away, so too does the Honor Harrington series show signs of dragging as it reaches its ninth book. A lot of the ground covered here has been walked before, particularly in a political regard. The leadership of the people’s Republic of Haven have always been fraught and divided, but here the open rivalry becomes a little repetitive. There’s only so much backstabbing and plotting you can read about before it starts to grow stale, and the Honorverse is verging on that point.

And while the universe is a vast one, that expansion comes at a price. there are a lot of characters by this point, most of them with multiple names that, frankly, all sound fairly similar. The series risks becoming a little unfocused, which I assume is why the side series split off soon, which I’ll be covering in due course. Despite this breadth, we don’t spend much time on planets other than Haven, Manticore or Grayson. In a setting as large as the one Weber has created, it seems a shame not to venture out further, save for the military excursions. Wasted potential, or perhaps something being held back for later.

None of this makes Ashes of Victory a bad novel, but the warning signs are there that the momentum is flagging. While each novel taken alone is a good read, the total may end up being less than the sum of its parts. But with the shake-up of the status quo at the novel’s end, I have hopes that this is the kick in the right direction that the series needed.

Better as a standalone than as part of the series, Ashes of Victory brings the Honor Harrington series one step closer to its climax. We can only hope the journey continues to be as enjoyable.