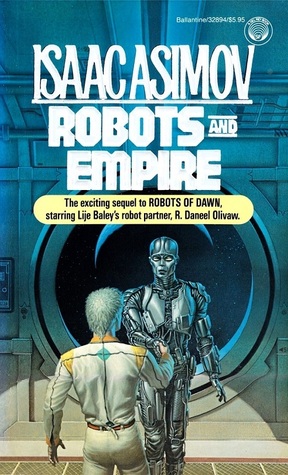 Two centuries after the life of Elijah Baley, his robotic partner Daneel Olivaw watches as the human race once again comes to the brink of war. The stagnant Spacer worlds and the Settler colonies from Earth seem determined to tear out each other’s throats. Alone, Olivaw can do nothing, but he has at his side Gladia of Solaria, and a robot named Giskard . . .

Just as its predecessor focused on tying together the strands that had been woven in the early robot novels and short stories, Robots and Empire works towards uniting the past and future of the setting. The clue is right there in the name. This book takes the characters of the Robot series and shows how the setting of the Empire trilogy came to be. As such, it’s something of a victory lap for these characters. Elijay Baley gets only a pair of small cameos, but his legacy is clear in everything Olivaw does. The brief scene they share together is one of the most powerful in the series. Kelden Amadiro makes a return as the villain, but his role is largely secondary to the affairs going on. Instead, it is Gladia who takes the central role. At two centuries of age, she takes things at a slower pace than Baley, and is largely carried about by events rather than driving them. Numerous side characters, including descendents of those who have gone before, fill out the cast. But the real stars of the show are of course Olivaw and Giskard.

In this robotic partnership, we have our most detailed investigation of the Three Laws yet. Every flaw and possibility is looked into here, some in extensive detail. The limitations and exploits of any rigid code are inevitable, and this is where Asimov faces them head on. Indeed, this is where we get the Zeroth Law, and all the changes to robotics that it brings. But for all the opportunities for storytelling it provides, this is an idea that will not be used much after the event, though both Foundation and Earth and the I, Robot film will deal with it, the former more explicitly than the latter. The lack of development in this regard is perfectly understandable. First of all, the Law exists largely to give a reason for the state of Galactic affairs during later parts of the Foundation series. Secondly, this is the last time we will be seeing robots in such detail. From here on out, robots have only a minor part to play in the story of Asimov’s future history.

Robots and Empire has many balls in the air, and is not quite so deft a juggler as The Robots of Dawn. With so much focus on what is yet to come, the actual story of the individual novel suffers from a reduced role. Things happen largely because Asimov needed to wrap up mysteries of his universe, rather than because it would make a good story. For the rereader, there is a sense of inevitability about the whole affair. Though it’s a book designed to show how things came to be, there is little excitement in finding out what will happen next. In spite of these faults, it remains a strong investigation of the cost of colonising other worlds, and one that is firmly balanced between both sides of the argument.

This book marks the end of an era, with only Olivaw appearing in future novels. But it is also the start of a new one, with plenty more stories still to come.