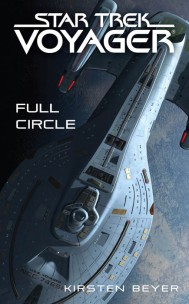 A year after Kathryn Janeway led her ship and its crew back to the Alpha Quadrant, Starfleet prepares for the next mission of the USS Voyager. But before it is even revealed, their dreams of a new age of exploration are shattered by a series of crises, both Galactic, and strikingly personal . . .

Full Circle is an odd book. Though it launches a new era for Voyager and its crew, it’s also rooted in the events of the past. Full Circle isn’t the first Voyager novel of the relauch era, and thise who are less than familiar with some aspects of this new age of Star Trek may find themselves more than a little lost as events proceed. And proceed they do, for the book covers events over a two year period, and they’renot always as connected as you might expect. At least, not internally. What it does connect to is not only past episodes and novels of the Voyager‘s adventures, but to wider elements of the expanded Star trek universe. generally speaking, I’m a fan of these intertextual references, as they make the universe feel more connected. As Full Circle shows, however, an overreliance on these connections can be detrimental to the reader who is unfamiliar with the other works cited.

While the Next Generation and Deep Space Nine relaunches have done a fair bit of heavy lifting in this expanded universe, Voyager has largely been left to do its own thing. Full Circle threads a line through the larger events of the continuity, pulling in character such as Worf, Troi and Martok, while keeping the Voyager crew at its heart. The first half is largely devoted to Paris and Torres as they are dragged into the murky world of Klingon religion. While the Klingon Empire has boasted several of Startrek’s strongest story arcs over the years, I’ve never been that enamoured of them as a culture. Their leather-clad, growly, honour-driven culture brings to mind too many of the Edgelords I’ve been stuck in RPGs with. That said, this section is a fine example of the Voyager team doing what they do best for one final time before they go their separate ways.

The second half of the book is both more scatterhsot and a lot more grim. After the detah of a major character (which happens off the page, in another book) we follow a broken and grief-stricken crew as they wage war against the Borg, running parallel to the events of David Mack’s Destiny trilogy. Being familiar with that trilogy, I found this to be the strongest act, even if it held few surprises in terms of plot. The deeper exploration of loss and PTSD that follows feels like a natural extension of these apocalyptic events, and it was a nice change of pace to have Star trek characters facing the consequences of their actions on a personal level.

Ending on an open note, Full Circle does a lot to set up more adventures down the way. I’ve read the third and fourth books in this saga around a decade ago, so I’m glad to see that things get a little cheerier for our heroes further along the road. Though this opening act can be confusing at times, Beyer’s take on the Voayger series is one I’m definitely going to be continuing in the future.

This probably isn’t the best way to get into the Voyager relaunch, but it’s still a strong book. One I’d recommend for those fans of Star Trek who’d like their adventures spiced up with some great character work.

One thought on “BOOK REVIEW: Full Circle, by Kirsten Beyer”