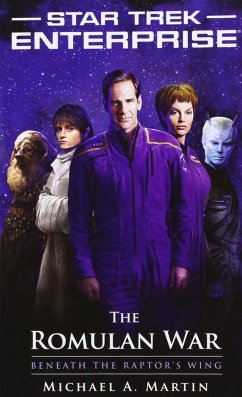 The Romulan Star Empire has declared open war against the Coalition of Planets. Built on shaky foundations, this young alliance of worlds has little hope of standing against the might of the Romulan warmachine. Yet this is exactly what Jonathan Archer intends to do . . .

Beneath the Raptor’s Wing kicks of a duology chronicling one of the most pivotal moments in Star Trek history. Following on directly from the events of Kobayashi Maru, this book details the first year of the Romulan War. It’s quite different to the hopeful exploration that defines Star Trek for so many (myself included) and the best parallel would be the Dominion War arc of Deep Space Nine. Like that televised conflict, Beneath the Raptor’s Wing doesn’t shy away from the harsher realities of war, but nor does it lose the sense of hope and camaraderie that made Enterprise so great a show.

Like the Xindi crisis that dominated Enterprise‘s third season, Beneath the Raptor’s Wing isn’t shy about pushing its cast to the limits of their ability. Trip is still working undercover in the Romulan Empire, and there are plenty more twists, turns and betrayals waiting for him in this book. The idea of Trip becoming a spy is one that I still find odd, but by this point I’m buying into it a lot more. As a counterpoint to his deceptions and dealings, we have Gannet Brooks, a reporter seeking the truth about Earth’s first real interstellar war. Personally, I love seeing journalists in science fiction, and the snippets and extracts of her articles give a neat little piece of flavour to the larger conflict.

The bulk of the story is, quite rightly, centred around the remaining crew of the Enterprise. Following the Kobayshi Maru incident, Archer is the broken captain of a splintering crew. Travis and Hoshi have real standout moments, though for different reasons. Travis carries the heart of the story, as someone who has faced personal loss and is increasingly disillusioned with the path Archer is taking. Hoshi meanwhile gets one of the glimmers of light in this fairly grim offering, and her brief stint as ‘Captain’ is a real high point. With T’Pol joining Trip’s storyline. Reed and Phlox round out Archer’s inner circle as reassuring pillars of stability.

This is a long book by Pocket Book standards, and it covers a lot of ground. Nevertheless, it’s very much the first part of a larger story, and offers very little resolution on its own terms. With the various political, military and personal arcs there is a lot to keep track of, but Martin’s style is such that it never feels heavy or drags. If anything, the book flies by too quickly, and you’re left wondering how it will all be wrapped up in the next volume.

This is essentially the fifth season of Enterprise we were never given, and fans of the series are sure to love it, even in spite of the odd faltering step.