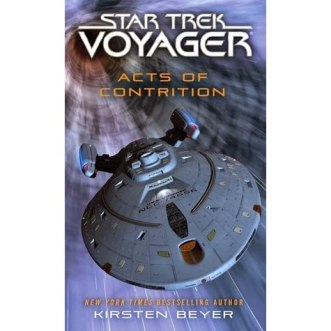 Voyager has made contact with the Confederacy of the First Quadrant, a growing power within the Delta Quadrant who could prove to be an invaluable ally. But the Confederacy has a dark past, and not everyone is willing to forgive . . .

Even in the grittier parts of Deep Space Nine and Picard, the United Federation of Planets is a pretty Utopian society. Essentially post-scarcity, it has near-total equality (unless you happen to be a synthetic lifeform), is largely at peace with its neighbours, and offers plenty of career opportunities regardless of skill level. Most of the planets Starfleet encounters are less developed, often one-issue societies, and exist mostly to examine moral quandaries. The more powerful foreign powers like the Klingons, Romulans, or Dominion tend to be openly antagonistic, and if they do have positive qualities, it’s rarely the focus of the story. Acts of Contrition goes against this trend to provide one of the most interesting alien cultures in Star Trek. A technologically and socially advanced society, but one with a lot of cultural baggage.

As revealed at the end of Protectors, the Confederacy was founded by people who ferociously exploited planets for resources. In this book we find that they still have a few ongoing issues that prove to be a speed-bump for diplomacy. The treatment of other species, nature, and other sexes all play a role. Beyer doesn’t go too heavily into any one of these, but together they create an unsettling and sinister undertone to the Confederacy. Also worth mentioning in the fact that the Confederacy has a state religion, and the way this is treated in the book is incredibly interesting.

Back in the Alpha Quadrant, Seven of Nine and Doctor Sharak (a Tamarian of ‘Darmok’ fame) investigate a mysterious plague spreading through the Federation. Now, this book was written seven years ago, but it is incredibly relevant now that the real world faces a pandemic of its own. It’s not exactly the same, of course, but having Sharak read reports on the spread of the disease and the ongoing efforts to slow its rampage will be eerily familiar to anyone who has watched the news in the past year. Having this plague tie in to the events of the Destiny trilogy is also a nice way of binding the Star Trek universe together, but you really don’t need to have read David Mack’s books to understand what is going on here. Although, for the record, I would absolutely recommend giving them a look.

While previous books in this series have been largely standalone with a few elements carrying over from one to the next, Acts of Contrition is very much a middle-of-series book. There are various plot threads and character arcs at work, some getting more of a look-in than others, and only some are resolved by the novel’s end. The main Confederacy thread ends on a cliffhanger that I am desperate to see the resolution of, so roll on Atonement. Despite how much is going on though, there is again Beyer’s perfect balance between characters. Anyone who can give both Chakotay and Harry Kim a lot to do is a winner in my book.

Another strong entry in the series, Acts of Contrition has gone a long way to making the Voyager relaunch novels one of my favourite parts of Star Trek canon.