-Click here for a full index of my Dune Saga reviews- 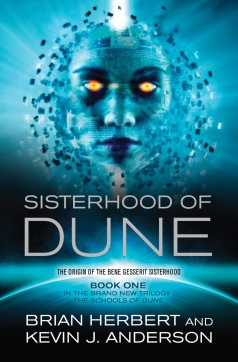 The Imperium stands at a crossroads. Along one path lies a new age of technology and the possibility of new thinking machines. Down the other is a dark age of fanaticism and mob rule. To guide the Imperium rises a new group, the Sisterhood . . .

Sisterhood of Dune kicks of the second Dune prequel trilogy with a bang. On my first read of these books, the Schools of Dune trilogy was my favourite arc of the larger universe, and I’m happy to find that it stands the test of a second reading. As one of their more recent works, Sisterhood is a book where Herbert and Anderson’s writing comes together seamlessly, having been honed by a dozen prior novels. There are times when you forget it’s the work of a team, and it feels more like a single author, so well are their styles matched.

The story picks up nearly a century after the defeat of Omnius, but while time has moved on, humanity hasn’t. Though the Butlerian Jihad was a success, the Butlerians are still present, and are now a much more antagonistic force. Their fanatic pursuit of an end to all technology is an all-too-plausible follow-up to the Jihad itself. The leader of the Butlerians, Manford Torondo, is easily one of the best original characters from the Herbert/Anderson era of Dune. A fanatic through and through, he’s a worryingly prescient example of the dangers of populist dictators. Here is a man who has no limit to his hatred, and not much to commend him but his charisma. Even when his arguments have no value, being little more than rallying calls to the mob, it’s easy to see why he has the support he does. Torondo’s solutions are simple, and even if you disagree with him, his mob is enough to convince most to go along with him. Remind you of anyone?

On the other side of the argument is Josef Venport. Venport’s arguments are based in logic rather than passion, pointing out the many uses of technology. If forced to choose, I would definitely be on his side, but it’s to the authors’ credit that the moral debate takes place between two people who could easily be the villain of another tale, but is none the less compelling for that. Venport’s use of advanced technology is a cautionary tale of sorts, although in this volume he remains a sympathetic character. Only the works of his scientists, building new cymeks and ever-deadlier weapons, hints at the darkness that is still to come.

Tying all of this together is the origin story of the Bene Gesserit. I have to say, I’m much more a fan of this version of the Sisterhood than Frank Herbert’s original. In the original Dune Chronicles, the Sisterhood are basically a society of evil witches. Here, they are given some depth. Sisterhood of Dune does exactly what an expansion to the universe should do, which is give more information on things that were originally glossed over. I know a lot of people prefer the mystery, but I’m a man who likes answers, and Herbert & Anderson deliver. Admittedly, this is the very early days of the Sisterhood, and so there is still a lot left undiscovered. That being said, these first few steps on the road to Dune are tantalising to say the least.

Even though it falls in the middle of the series, Sisterhood of Dune is a perfect stepping-on point for anyone looking for more Dune content. It’s rich, action-packed, and quite simple a thrilling tale.