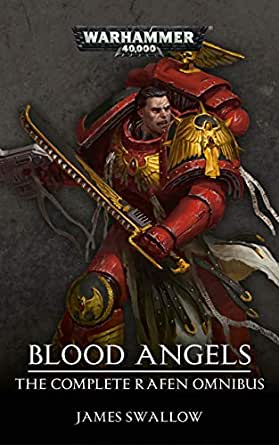 The Blood Angels are among the more famous chapters of Warhammer 40,000’s Space Marines. Maybe not quite as famous as the Ultramarines, but if you’ve ever walked past a Games Workshop there’s a good chance you’ve seen their miniatures in the window. With their bright red armour and tendency to walk around without helmets on, the certainly cut a striking figure, and so its unsurprising that they’ve amassed such a following. They have the literature to back them up too, with names like Dante and Mephiston being some of the forty-first millennium’s most famous faces, each sporting numerous books to their name. Go back further into the murky depths of Black Library though, and you’ll find another name. Rafen. That’s the man whose stories are gathered here, all from the pen of James Swallow.

Swallow is one of my favourite tie-in authors. Besides his excellent Sisters of Battle books for Warhammer, he’s also written for Star Trek and, back in the days when I was more of a fan, Doctor Who. I have to say though, Rafen is far from his best work. That might be obvious, what with the first book in this omnibus being from way back in 2004, but coming so soon after a run of far superior novels from the same hand, it was a disappointment. Every book here is perfectly fine, and I don’t regret the time spent reading any of them, but Swallow has unquestionably come far as a writer in the past seventeen years.

A lot of my issues with this omnibus are not with the actual craftsmanship, however. As we’ve seen in recent reviews, the Warhammer 40,000 setting is evolving with each new book. But this wasn’t always the case. Back in the early days of Warhammer literature, the focus was less on developing the world as it was on showcasing the world. If you’re looking for depth you won’t find it here, but if you want an introduction to one of the factions, this isn’t the worst place to start. there’s a tangible sense that this book exists to encourage people to pick up and paint. These are Space Marines, it says. These are Blood Angels. This is what Chaos is. This is the grim, dark future. Just like the original Eisenhorn, it’s entry level stuff, while I have been spoiled by a universe that has existed longer than I’ve been alive.

As for the Blood Angels themselves, they’re pretty much everything I expect from Space Marines. They’re big, stompy heroes that I wouldn’t really want to spend any time around. Not least because they have genetic flaws that promote murderous tendencies. If the Space Wolves are Space Vikings (though not my favourite ones), then the Blood Angels are Space Vampires. In this, Swallow captures the full horror of the forty-first millennium. Even the angels on the side of ‘good’ (for whatever good is) are blood-drinking monsters. Just imagine how horrifying that makes the villains. And this series has villains aplenty, from the infamous to the relatively unknown.

This isn’t a book that’s going to blow anyone’s minds, but it has its moments. The opening short story The Fury is perhaps the grimmest, most fantastic piece of fiction Black Library has put out for Warhammer 40,000, and if that whets your appetite, Swallow has laid out a full banquet for you to enjoy at your leisure.

One thought on “BOOK REVIEW: The Complete Rafen Omnibus, by James Swallow”