-spoilers, but this was written a hundred years ago- 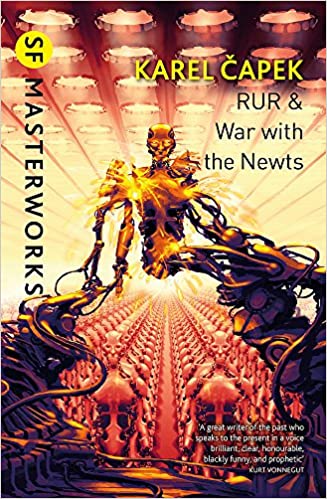 In RUR, the invention of robots leads to a new golden age for humanity, but when robots rebel, the future of mankind is threatened. Then, in War With the Newts, the discovery of an aquatic civilisation leads to a tragedy of exploitation and an incalculable death toll . . .

This Gollancz Masterowrks edition collects two of Čapek’s works, as the title suggests. I’ll start off by talking about RUR, as that’s the reason I picked it up. Rossum’s Universal Robots is a story I’ve been meaning to get to for several years now. I’m a massive fan of robotics in science fiction, so it makes sense to go back to the very beginning. As an aside, there’s a pleasant symmetry in RUR being written in the same year Isaac Asimov was born, given how the latter popularised many ideas about robots that have their roots in Čapek’s story.

Something I had largely forgotten in the time it took me to get to RUR is that this is a play. Despite having studied theatre for several years, I’m not a particularly big fan of the medium. It has its pros and cons, but by and large it’s not for me. That being said, I found RUR a fun exercise to imagine the staging of. It’s a pretty brief affair – three acts and an epilogue – and I reckon any student company could make a good go staging it. despite my vivid imagination, however, at the end of the day these are only words on a page, so you miss out on the more immersive aspects of theatre.

Even so, I really enjoyed RUR. With a hundred years’ experience with robot stories, it’s somewhat predicate, but that doesn’t detract from the genius of the ideas. Rossum’s robots are what I would think of as androids rather than clunky metal automatons, and even at this early stage the parallels between human and robot development are explicit. The Frankenstein complex is in full force here, and the play poses a lot of questions about the relationship between humans and work, hinting at some pretty depressing answers. Yes, the gender representation is very dated, but the ideas and the dialogue hold up incredibly well. If there was a performance of this near me, i’d definitely be tempted.

Sadly, The War With the Newts does not hold up so well. It’s easy to see why these two stories have been packaged together. Like the robots, the newts are immediately exploited by humanity, turned into cheap labour and forced to perform for human entertainment. There’s also a suggestion that they might be consumed for food, but that’s neither here nor there. Like the robots, the Newts eventually turn on humanity, and its with the same bleak inevitability of extinction that the story ends.

Though it’s a full-fledged novel, I found this one far harder to read than RUR. Novels of this age are always hit and miss for me, as my reading tastes are not the same as readers’ of the early twentieth century. This one is unfortunately a miss, with Čapek’s writing incredibly difficult to parse, and there were times when I debated setting the book aside for a while. The final chapter in particular is just openly bizarre, as Čapek argues with himself over how the story should end. A very literal case of author insertion, and a struggle to comprehend. There are good ideas here, but the presentation fell flat as far as I’m concerned.

Nevertheless, I’m glad I picked this up for RUR‘s sake. It absolutely deserves its place in the SF canon, and holds up a century after it was written.