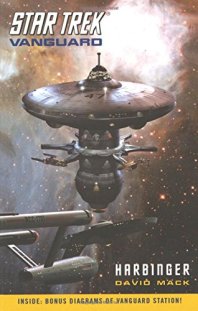 On the Federation’s newest frontier, an expanse of space known as the Taurus Reach, stands Starbase 47, better known as Vanguard. Bordered by the Klingons and the Tholians, this region is a powder keg, but Starfleet’s interest is not purely political . . .

A few months ago I put a poll on Twitter asking what part of the Star trek Litverse I should read next, and although I got distracted by a read-through of Enterprise, the winner by a small margin was Vanguard, narrowly beating Titan. It took me a little longer than I planned to get the series together and clean up some of my TBR, but now I’m ready to dive into one of the Litverse’s more famous series. I know basically nothing about it going in, save that it’s set on a space station and occurs parallel to the events of The Original Series. That’s the Trek time period I’m least familiar with, so I’m looking forward to a fresh experience.

The synopsis initially made me think I was getting DS9 a century earlier, and there is some truth in that. there aren’t any Prophets or wormholes, but it’s a lot messier than a lot of Star Trek. Not all of the characters are enlisted Starfleet personnel, for a start, and even those that are in uniform are far from heroic. It’s grounded and a fair bit more messy than the voyages of the USS Enterprise. The cast of characters is diverse in both demanour and allegiance, from station commanders and lawyers, to Orion smugglers and Klingon spies. There’s a handy dramatis personae at the end of the novel that I would recommend reading before the main story. Unlike most of the other Litverse series, Vanguard doesn’t have TV characters in a starring role. In this first volume, Kirk, Scotty and Spock do make an appearance, but their part is secondary, serving to ease the reader in just as DS9 featured Picard, or Voyager had an appearance from Quark. Enough to get you settled in while introducing new faces.

Though there is a plot, the majority of this book serves to set up the events and characters for the rest of the series. With a full cast to rival any TV offering, there’s a lot of heavy lifting to be done, and all the head-hopping does take a little getting used to. As well as characters, Harbinger also has to set up the universe. TOS is pretty notorious for it’s lack of continuity, so putting a more serialised story in a concurrent time period takes some work. The Klingons are easiest to get a hold of, as they’ve been a part of the universe for so long that even the more causal reader will be familiar with how their society works. But the real point of interest for me is the role of the Tholians. Having only appeared once in TOS, and again in a Mirror Universe episode of Enterprise, they have a history with the franchise, yet have never really been explored the way most others. The same could be said for the Gorn, but the Tholians with their utterly inhuman appearance and behaviour have always fascinated me. What we get in Harbinger is a promising start, and I look forward to learning more about them.

David Mack is one of my favourite Trek authors, but he is only responsible for half of this series, the other half being the work of Dayton Ward and Kevin Dilmore. Trek has a strong history when it comes to being the work of many hands, especially in the Litverse, but I’m not sure how this alternating author structure will work for what appears to be such a tight series. I’ve only read one Dayton Ward novel before, and that was so long ago I can’t remember it. Nevertheless, Mack has set up an interesting series, and I am here for all of it.

Harbinger doesn’t just kick of a famous part of the Litverse, but also launches my effort to get a sizeable chunk read before the release of the Coda trilogy at the end of the year. be sure to stick around for the rest of my journey through Star Trek’s expanded universe.