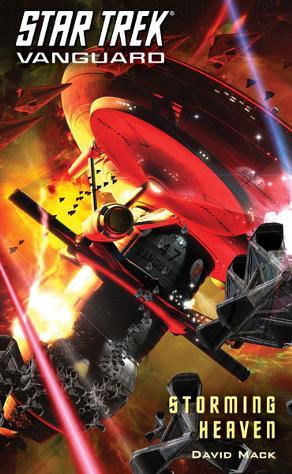 The end is nigh. Operation Vanguard is on the brink of success in its efforts to stop the Shedai and harness the power of the Taurus Reach. But the Shedai will not go quietly into that good night, and nor will the Tholians continue to allow Starfleet to simply do as it pleases . . .

All goof things must come to an end, and so the Vanguard epic hurtles to an action-packed and devastating finale. After seven novels and an anthology, there is a lot on the table, and even after What Judgments Come there are still numerous arcs to be resolved. So let’s break it down a little.

The ongoing Klingon political drama is one of my least favourite parts of the Star Trek litverse. On Deep Space Nine, the Klingon story-line was brought to life by great characters and greater actors, but in prose form these story-line shave long since become repetitive, and even the best writers struggle to hold my interest. Mack at least limits the amount of Klingon language on the page, so that it’s easier to read. There will be a lot of fans for whom the Klingons are of great interest, but I am not one of them.

The Tholians, on the other hand, are one of the strongest parts of the book. Even though we only get a handful of chapters from a Tholian perspective, what we do get is brilliant. The Tholians are a wonderfully inhuman species, and while we don’t have many interactions between Tholians and Federation, I love the history of their species that we’ve been given throughout this series. they’ve come a long way from their debut in The Original Series, and in Storming Heaven they feel like a true threat.

There have been a lot of losses since the Vanguard crew were first introduced, and in Storming Heaven we get a fitting send-off for every one of them, be they original member or a face who joined along the way. Every character gets a great moment in the spotlight, and with endings on a sliding scale from triumph to tragedy, it’s hard to think of more fitting ends to most of the character arcs we’ve followed for eight books.

If I have one major gripe with this book, it’s the appearance of the Enterprise at a crucial moment. Tying Vanguard into the broader Star Trek narrative is a good idea, and was put to excellent use in Harbinger, where Kirk and Spock played minor roles. I can also appreciate the symmetry of having the famous crew reappear at the close of this series. And yet, having Kirk and company show up in the manner they do feels like an easy way out. It’s not a deus ex machina, but it’s close. relying on known names instead of having the Vanguard originals make their own way feels like cheating, and does a disservice to the work done by Mack, Ward, and Dayton in previous volumes. This gripe is by no means a deal-breaker, but it did bring down my enjoyment of the book.

Overall, I can see why Vanguard receives the praise it does, and I agree that it’s one of the best series the Trek literary universe has produced. Aside from the odd flat note, Storming Heaven provides a satisfying end to an epic saga.

One thought on “BOOK REVIEW: Storming Heaven, by David Mack”