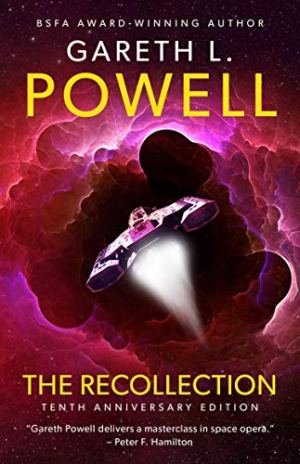 When Ed’s brother disappears into a mysterious portal, he and his brother’s wife Alice embark on a trip to find their missing relative. Four hundred years later, spacefarer Kat Abdulov embarks on her own race against time . . .

As a quick note, I read the tenth anniversary edition of this book, just released in 2021. Aside from an introduction by the author, I am unaware of any differences between the two versions. My assumption is that the text of the story is identical, but I am willing to be proven wrong.

In a lot of ways, The Recollection stands as a foundation for the rest of Powell’s work. Though I’ve only read his Embers of War trilogy, many elements are familiar. Ancient civilisations, mismatched crews, ordinary people thrown into extraordinary situations. group dynamics with a splash of family drama on the side. But the most obvious connection is the sentient spacecraft. This is a trope I’m personally quite fond of, and one that turns up a lot in science fiction. Powell strikes me as a man who is equally fond of the idea, seen here in the form of Ameline. Ameline isn’t quite in the same league as Trouble Dog, but it’s easy to draw the lines between the two. Ameline is more of a supporting character in this book than its successor, and lacks the sarcasm of Trouble Dog. It’s natural that ideas will develop and grow over time, but coming to The Recollection after Embers of War does make this book suffer in comparison. So much of this book feels like a prototype for the richer stories still to come.

Despite that criticism, the actual storytelling of The Recollection feels fresh. Even ten years ago, Powell had his trademark, digestible style. This is a book where the pages simply fly by. Compulsive readability is a trait that a lot of books lack, but I read The Recollection in just two sittings. There’s nothing confusing or unnecessarily obtuse about Powell’s writing, which is an impressive feat when writing about the effects of relativity. The prose is clean and concise, and very moreish.

On a worldbuilding level, the arches used as transportation are a neat concept that I wish more stories employed. If Stargate taught us anything, it’s that you can have space opera without massive fleets. (Although Stargate had its cake and ate in in that regard.) Powell is hardly writing hard SF, but there’s a definite crunch to his interstellar network, taking into account both time and space. There’s a strange moment later on in the novel involving destiny and chosen ones that comes slightly out of the left field, but generally I enjoyed the balance between narrative necessity and the rigour given to technological limitations.

The twin story-lines, though they do eventually converge, are the book’s only real weakness. I’m much more interested in the spaceship side of things, and am therefore glad Powell chose to focus on these stories in the future. Watching Ed and Alice hope through one arch after another, rambling across various planets does grow repetitive after awhile. There’s a sense that they’re just wandering around until the plot finds them. It probably doesn’t help that was never that interested in the love triangle that binds Ed, Alice, and Verne. Though the rest of the book kept me guessing until the end, the relationships between the leads were fairly predictable. In a way, I’m glad they didn’t take up more of my time, but this is definitely an area in which Powell has improved over the years.

The Recollection is a perfectly entertaining story in its own right, but together with Powell’s more recent work, it is a fascinating insight into the evolving work of one of Britain’s best active SF authors.

4 responses to “BOOK REVIEW: The Recollection, by Gareth L. Powell”