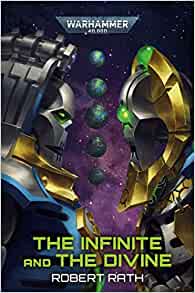 Tazyn the Infinite is a collector of history, roaming the Galaxy in search of new acquisitions for his collection. But as the Necrontyr prepare to rise from their millennia of slumber, he must work with Orikan, his greatest rival. Will they bring about the salvation of their people, or will treachery see them both returned to the grave . . ?

Robert Rath’s debut Black Library novel made a big splash when it hit shelves last year, for both the story itself and the fact it focused on xenos rather than Imperial characters. I missed out on the hardback (as I so often do) but the paperback release has been among my most anticipated books of 2021. A year on from that initial release, I’ve finally got my hands on The Infinite and the Divine. Maybe I built it up too much in my mind, but I didn’t enjoy this book as much as I hoped to. I suppose that’s the problem with hype. We get carried away, convincing ourselves that the new thing is the very best thing ever. And when it’s merely good rather than great, we can’t help but feel let down.

The Infinite and the Divine takes place over the course of ten thousand years, starting at the time of the Horus Heresy, and culminating in the current Warhammer 40,000 time frame. Despite this, you don’t need to be an expert in the lore to follow what happens. I caught a few of the more obvious references (the destruction of Cadia, for example), but I’m sure there are more to go around if you are more familiar with the game’s rich history. The main body of the story is less concerned with sweeping galactic politics than it is with a single planet. The bulk of the action occurs on the world of serenade, and this is where the epic time frame works best. We spend well over a thousand years with this planet, seeing it change hands and struggle against the odds.

For a book that opens with necrons fighting dinosaurs, I found the first half of The Infinite and the Divine a struggle to get into. I can see why Black Library have been low on the xenos content until recently, as the necron mindset is hard to get into. How much of this is intentional, and how much of this is Rath’s writing, I can’t say. I’ll have to read more of his work before making a final judgement. The other reason I struggled up until the second half is the involvement of the orks. 40k’s orks are the polar opposite of the necrons. They are moronic and comedic while the necrons have a tragic weight to their existence. I’m yet to find an ork book that I haven’t had issues with, and that is the case here. The factions are so different, both in narrative terms and stylistically, that they don’t feel as though they should exist in the same book.

The second half is an improvement. perhaps because of familiarity, but also because we get forward momentum with the plot. In this section, Trazyn and Orikan share a lot of page time, and it’s their interactions that carry the novel. Equal partnerships are sorely lacking in a lot of SF, and Rath balances the backstabbing with a healthy dose of banter. The jokes here land far better than the orkish shenanigans of earlier chapters. The interplay between these two immortals is something I’d happily see much more of, and the novel suffers whenever they are separated. I think this is a standalone, but there is definitely life in these characters yet.

Even though it doesn’t live up to expectations, The Infinite and the Divine has its share of moments, and hopefully signals a lot more xenos material in Black Library’s future.