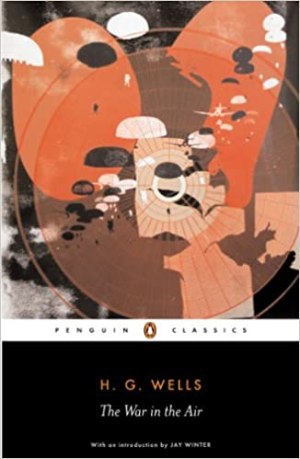 The dawn of the twentieth century sees the age of a new and dreadful weapon. No longer are fleets bound by the ocean, but may take to the skies and rain death upon soldiers and civilian alike . . .

This is not a work of science fiction. It came about too early for that. But as is true of The Time Machine and The War of the Worlds, Wells created novels that form a prelude to the genre explosion that would occur later in his lifetime. I make this distinction because The War in the Air is, if we classify it by modern standards, possibly the earliest forerunner of military science fiction that I have read.

Even without the copious pages of introductory material, the context for this book is clear. It was released prior to the First World War, but depicts a war that is fought in the air (as the title handily conveys). More impressively, the opening stages of the war feature the assault of New York. The most obvious comparison is the blitzkrieg of the Second World War, but you could easily draw a parallel to the 9/11 attack on the World Trade Centre. Not a bad feat of augury from a man writing nearly a hundred years earlier. The introductions to this version of the book talk more about Wells and his uncanny prophecies, fully revealing the story of the book before you’ve even started the first chapter, which is a tad annoying. Annoying too are the edits to make the book more accessible to modern readers. Americanised spelling aside, this follows the form of other Penguin Classic with several pages of endnotes. I understand some people prefer this style, but I’m a footnote man myself, and always will be. And I’m not even going to go into the abomination that is the cover.

This is far from my favourite Wells book, but it has a lot of his hallmarks. The protagonist – one Bert Smallways – is an ordinary man swept up by events and carried alone. I enjoy this sort of passive protagonist, with the events of the war being seen largely through his eyes, and with all of his biases. The main problem I have with Bert is his language. or rather, the way Wells writes him. Accents are hard to convey in prose without rendering dialogue unreadable, and Wells stumbles headfirst across this particular line. letters are dropped, vowels swapped around, and it pulls me right out every time the man opens his mouth to speak. The German accents are just as irritating, to the point that I preferred it when they spoke in German, and I could simply refer to the endnotes to determine what was being said.

As for the story, there isn’t actually that much of one. We follow Bert as he learns about the onset of war, is captured by Germans, and witnesses a few battles before returning home. All of the ideas are very good, but Wells is less interested in the war as he is on the effects of society. By which I mean, Edwardian society. Some of what he has to say is still relevant, notably the way that war has spread beyond military concerns to encompass all manner of civilian life. But a lot of it is so rooted in concerns of the day that it passes me by. Between battles, a lot of the writing is rather dull, and when not being physically dragged by Germans, Bert tends to wander around in a meaningless fashion.

The War in the Air can’t compare to Wells’ true classics, but it is an interesting piece nevertheless, not least for it’s historical significance. It’s a snapshot into the mindset of a different time, with all the fascination and faults that come with that. Clearly, on a pros level, this book has been weathered by the passage of time. But that same passage has brought so many aspects from page to reality, and even if I didn’t enjoy it as a story, it stands as testament to Wells’ genius as a prophet of things to come.

One thought on “BOOK REVIEW: The War in the Air, by H. G. Wells”