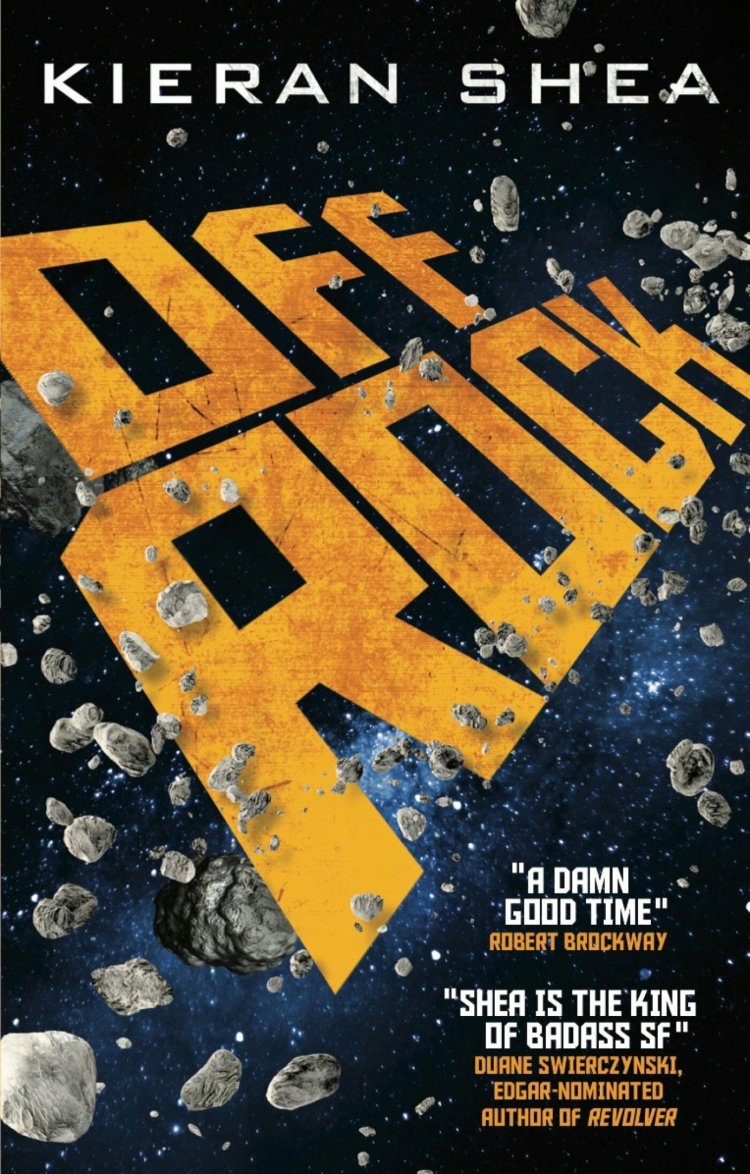 The year is 2778, and humanity has reached the stars. Or the rocks at any rate. Mining companies with the might and authority of nation states are doing a roaring trade in pulling every last ounce of resources out of any asteroid they can find. Miners work under terrible conditions, knowing they could be fired at a moment’s notice.

Jimmy Vik is one such worker. Approaching middle age, potentially an alcoholic, and with nothing to show for his labours but a small pension, he’s had enough. So when he stumbles across a gold deposit while doing demolition work, he makes plans for an early retirement.

The only problem is getting that gold off the rock. . .

Off Rock is a very fun book. The writing is conversational, reminiscent of John Scalzi. There were times when it genuinely felt like an overheard story, told by an increasingly inebriated man down the pub. The tale rattles along at a brisk pace, taking no breaks, for all of its three hundred pages. It’s addictive, like a stash of prohibited candy, and you’ll want to devour it all in a single helping. I know I did.

For such a short book, there is a lot of head hopping, with five major players. Shea does a masterful job of balancing their individual yet intertwined plotlines, making sure everyone has something to do, and none outstay their welcome. It’s a delicate balancing act that a lot of writers (myself included) seem to struggle with, but Shea has no such difficulties.

The plot is a simple one, a heist rendered almost comedic as more and more people are drawn into Jimmy’s plan, each of them worrying (sometimes rightly) that they’re going to be cut out of the deal. As the heist becomes increasingly public knowledge, Off Rock shows the same snowballing effect most often seen in sitcoms, with lies being invented just to cover up older lies. It’s with the people that Off Rock really shines. K7-A may be a small rock in the middle of nowhere, but it’s home to a fascinating and diverse cast of characters.

While it would be a stretch to call any of Off Rock’s protagonists heroes, they are undeniably endearing. Even the vaguely disgusting Jock has his moments. Despite his flaws, you can’t help but root for Jimmy. he’s a classic underdog: Unskilled, downtrodden, and at times just plain desperate.

It’s hard to take issue with a book as charming as Off Rock, but I did find the worldbuilding to be slightly lacking. We’re given everything we need to understand Jimmy’s situation. But that’s about all. A greater exploration of humanity’s interstellar domain would not have gone amiss. But that’s really a minor issue, and a personal one at that.

If you’re looking for a deep insight into the human psyche, or an intricate multi-layered narrative, you won’t find that here. What you will find, is a pile of fun, a crew of lovable rogues, and a rollicking way to pass a few hours’ reading.