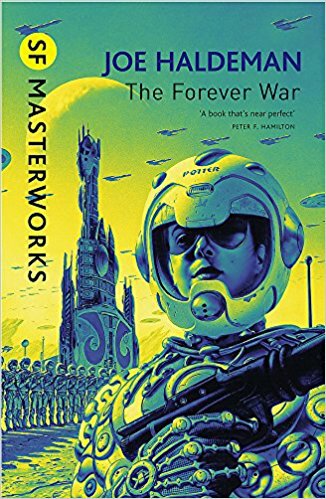 The year is 1997, and Earth is waging war against the Taurans.

With the war happening across vast interstellar distances, Einstein’s laws of general relativity mean that for every month the soldiers spend on the front lines, years pass by back on Earth.

William Mandella has enlisted in the UNEF (United Nations Exploratory Force), dedicating his life to fighting back the alien threat. But as the war drags on, he finds that the home he left behind can never be the one he returns to . . .

It’s always a tricky proposition, reviewing a stone-cold classic like The Forever War. Such is its influence on modern SF that I was surprised to see how recently it had been published. There are two main issues with a modern reading. One technological, and one social.

Obviously, (Despite what the Internet may wish you to believe) Earth was not in an interstellar war in the late 90s. But the date is a significant one, chosen so that the same soldiers who fight the Taurans were also present in the Vietnam war, as Haldeman himself was. The scenes of warfare on the planetary surfaces of the galaxy, through jungles and trenches, would have nowhere near as much of an impact had they not been written by a veteran. Tempting though it may be to label The forever War ‘alternate history’, the (thankfully) inaccurate timeline is of no real consequence, as the Earth we know, the Earth Mandella knows, is quickly left behind.

Despite knowing that ‘home’ will have changed, the Earth of the mid 21st century is almost as alien as the Taurans themselves, and that is the masterstroke of this novel. The alienation of humanity’s own soldiers as they return from the front is beautifully done. So different is this new world that the soldiers would rather return to the front lines than try to adapt to it. But that leads to the second issue. The social one.

In the Seventies, Haldeman’s vision of a global embrace of homosexuality must have seemed daring, even progressive. But from a 21st century perspective, there’s is something just not quite right. I doubt this particular vision would make it past modern censors and sensitivity readers. There is, much to my surprise, an asexual character, Charlie, possible the earliest example of one I have found in SF. Nevertheless, the changing sexual morality of Haldeman’s humanity, while inventive, never seems, well. Right.

Like so many older works, The Forever War is relatively short, only 238 pages in the Gollancz edition. But a lot of ground is covered, both physically and thematically. Broken into sections covering decades or even centuries, the realistic battle sequences and detailed discussion of physics complement each other well. The ending may be abrupt for some, but I feel that was the intended effect. A sudden, final jolt in the narrative. There are sequels, and I hope to get around to them sooner rather than later, but The Forever War, like all greats, is a functional standalone.

If you want to read one of the founding fathers of Military SF, then The Forever War is a wonderful place to start. Though dated in some aspects, it remains a timeless classic.