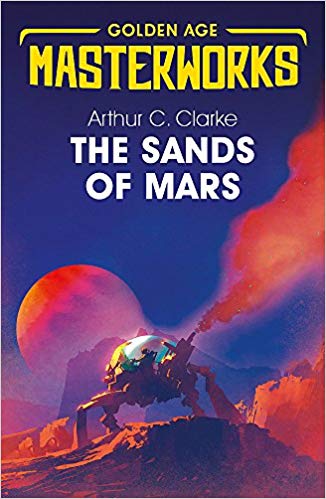 In the early 21st Century, humanity has reached Mars.

Science Fiction author Martin Gibson has received special permission to travel to the red planet, to document the lifestyle of the colonists and to promote further investment. Not that he’s a propagandist, of course.

But Mars is hiding a secret. And so are its inhabitants. Secrets that will affect not only Mars, but the future of human civilisation . . .

I have a confession to make. Despite being an avid SF reader, and considering myself fairly knowledgeable about the genre, I have never before read an Arthur C. Clarke novel. There’s no real reason for this. I’ve just been busy with other authors. But with the GA Masterworks range sitting temptingly on the shelves, I decided this was an oversight to be corrected.

This is a hard review to write for one simple reason: Not a lot happens in this book. It’s not bad, or boring, or even slow. It’s just quiet. It takes almost half the book for Gibson to get to Mars, let alone do any investigative journalism. And while reading crew interactions passes the time, it’s hardly stimulating material. Even when we get to MArs, the pace barely picks up. Meals, excursions to the wilderness, and even plane crashes are handled with the same matter-of-fact, understated tone.

It doesn’t help matters that Gibson is a spectacularly bland protagonist. There’s an old saying ‘write what you know’, but The Sands of Mars is proof that this is not always a good idea. It’s always difficult to make writers interesting as characters, especially when the writer carries so many of the author’s qualities. It’s one of the reasons I never get on well with a Stephen King novel. In Clarke’s work, the SF writer watching his ‘predictions’ be proven wrong time after time is rarely anything more than an observer. Even towards the novel’s climax, when he makes a world-changing discovery, it’s others to do the real work. This makes sense, in a way, because he is after all only a novelist, not a scientist. But while realistic, it doesn’t make for a good story. It’s almost enough to convert me to the modern-day obsession with character agency.

All of that will make it sound like I hated the book, but I didn’t. There’s nothing in it to engender such a strong reaction. The Sands of Mars is perfectly pleasant in its own way. Quaint and charming. There are genuinely good ideas in the last third. And while I don’t think enough was done with them in this book, those ideas are tantalising enough for me to pick up another Clarke book if one should find its way to nearby shelves. His writing is clear and conscise, his ideas are good, I just don’t think this was the best place to start with his works.

In the end, there’s nothing stand-out about this book, but it’s enough to whet the appetite of the reader. Hopefully i’ll find his next book more filling.