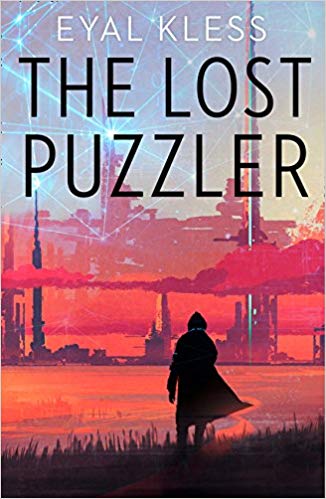 In the ruins of an ancient civilisation, humanity clings to survival.

Rafik is a Puzzler – one of the few born with an innate ability to operate the mysterious technologies of the lost world. But in his remote, deeply religious village, this makes him an infidel. Forced out of his home, Rafik learns that the world is more dangerous than he could possible have imagined.

Over a decade later, a man comes looking for Rafik. But in order to find him, the man must first learn his story, told by those who knew him best . . .

The Lost Puzzler took me the best part of a week to read, but it already feels like I’ve been living in that world for months. The ruins of the Tarakan civilisation bleed history. A world more advanced than our own, reduced to rubble, but still eerily familiar. I spent a long time wondering if it was the ruins of our civilisation, or an alien one. Thankfully, I got an answer in the end. An answer that was satisfying, but left enough room for further explanation, something I hope we see.

Framing narratives are one of my favourite literary devices. The idea that the story I’m holing is being told to someone else. That they are learning at the same time as me. But it can be difficult to carry off. If the speaker is a character, you can generally be sure they survive, for one thing. For another, it’s hard to balance two storylines separated by time. I am happy to say that Eyal Kless does an amazing job of this. Both Rafik and the unnamed historian face difficulties, and it’s hard to call either one the main storyline. It would be impossible for either to work without the other.

There’s an almost fantasy quality to the Rafik’s journey. Straddling the line between quest narrative and episodic adventures, we see much of the world through his inexperienced eyes. And he’s a compelling protagonist. Sympathetic without being pathetic, by turns brave and reckless. It’s hard not to like him. One thing I appreciated was that, despite being branded an infidel, he never loses his faith. The religion of his village, to my amateur mind, is Islamic, and it’s an unfortunately rare treat to see it handled with such care. Even affection. I’m not the most religious person in the world – far from it – but Rafik’s daily acts of prayer are almost inspiring in the comfort they offer him.

I think it would be a spoiler to talk too much about the wasteland Rafik and the historian journey across, but one thing I would like to bring up is the heavy use of cybernetics. Those who modify their bodies are known as Trolls. Another fantasy element creeping in. But they are as varied in morality as their implants. We see enhanced vision, dart-guns in false hands. Even a man with a cannon for an arm. The mix of high technology and fantasy styling is something I’ve only seen rarely, and never handled as well as this.

The Lost Puzzler is a book that drips ideas like a wet sponge, leaving them pooling in your mind. But it never loses sight of the story its telling. There are twists deceptions, everything you’d expect, but never as you expect it. For all that, it’s never confusing. Kless’ writing is smooth and fluid. It’s a book I happily read for hours at a time, often late into the night. One that swallows you up and holds you tight. There’s not a single thing about it I’d change.

In short, a marvellous and accomplished debut on the SF scene. I really hope we see more of Kless in the future, because this book is simply fantastic.

5 responses to “BOOK REVIEW: The Lost Puzzler, by Eyal Kless”