-This review contains spoilers for ALL previous Gaunt’s Ghosts novels. Proceed with caution- 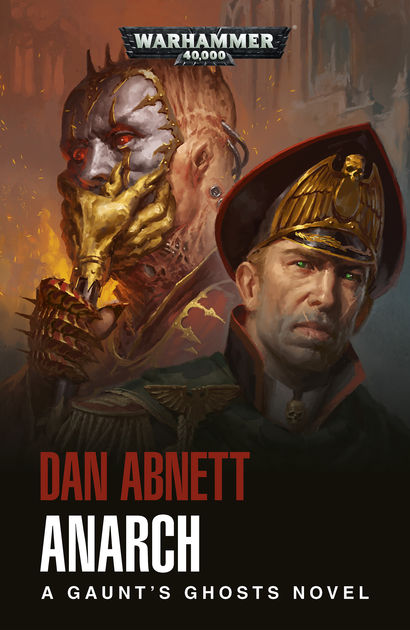 In the grim darkness of the far future, there is only war.

Commisar Ibram Gaunt and his men have survived three decades of war in the Sabbat Worlds. A war predicted to last for over a century. Most recently, the Ghosts defended the world of Urdesh, and Gaunt was promoted to Lord Executor – second-in-command of the Crusade – after preventing a coup.

But now Anarch Sek is making his final push against Imperial forces. desperate to obtain the Eagle Stones, and with a personal score to settle against Saint Sabbat herself, he will stop at nothing to finally eradicate the assembled legions of humanity. And he will kill anyone he has to in order to win . . .

This is it, then. The big one. The fifteenth and potentially final Gaunt’s Ghosts novel. If this does prove to be the swan song of the men from Tanith, then it is a worthy one. A fitting conclusion to two decades of novels, short stories and spin-offs.

In spite of the stakes, the action takes place on a fairly small scale. The Ghosts are protecting a single, ruined city. Indeed, nearly a quarter of the book occurs in the same basement. But this acts as a pressure cooker. Secrets are spilled, tensions boil over, and allegiances shift like sand. There are times when the Ghosts are more at risk from their peers than from the lasguns and warp magic of the Archenemy, and that’s exactly how it should be.

The cast list of Gaunt’s Ghosts has sprawled since the early novels, and Abnett does a fine job of giving everyone their moment in the sun. Gol Kolea confronts the truth about his family troubles. Meryn and Blenner get the reckoning they’ve been headed for. Rawne’s loyalty is tested like never before. The rift between Van Voytz and Gaunt is exposed. Brin Milo’s fate is finally revealed. It’s almost impossible to discuss these without spoilers, so I won’t try.

One thing I’ve always admired about Abnett is that he’s not afraid to kill of his characters. Even favourites like Corbec and Bragg. There are no safe passes for long-serving team members, and that’s exactly how it should be. This is the bloodiest war the Galaxy has ever seen, and it’s only right that the price of victory should be a high one. With this being the grand finale, the death toll mounts dramatically. Each time a gun is fired, you have to ask yourself, ‘Who have we lost this time?’

The scale of the Sabbat Crusade, a century-long war, makes ending a series difficult. Obviously the Ghosts cannot win the whole war. But nor would they stop until either the Archenemy or they themselves were wiped out. Part of me wishes Abnett had gone for that darker endng, everyone dying. It would be only fitting for the endless conflict of the 40,000 universe. But, and here again i must avoid spoilers, Abnett takes another route, leaving us with that rarest of things in the grim dark future: Hope.

If you’ve been with the Ghosts from page 1, then this is a book you cannot afford to miss. If not, then find a copy of The Founding. It’s a long trip, and has it’s ups and downs, but the journey is most certainly worth making.