-Click here for a full index of my Black Library/Warhammer 40,000 reviews- 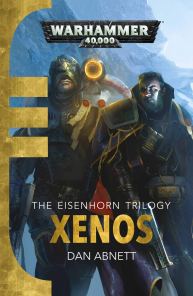 The Inquisition is all that stands between mankind and its many enemies. Heretics, Demons, Xenos. All pose an existential threat to the God-Emperor’s people. Gregor Eisenhorn is one Inquisitor among thousands, but something has marked him for greatness . . .

Eisenhorn is one of those names that will be familiar to most Black Library readers. Along with Ibram Gaunt, Gregor Eisenhorn is a creation of the legendary Dan Abnett. The Eisenhorn trilogy (four books if, like me, you include the Magos collection of short stories) is one of the most famous series Black Library have ever put out. A little surprising then, that I’ve never taken the time to read it. I’m a big fan of Abnett’s work, particularly the Sabbat Worlds material. That being said, I didn’t enjoy his Ravenor trilogy all that much. Since Ravenor is the successor to Eisenhorn, perhaps it’s not so surprising Xenos has taken me this long to read. But with the upcoming rerelease of Pariah and the release of Penitent, I can’t hold of any longer, and Dan Abnett has once again pulled me back into the grim dark world of the forty-first millennium.

It’s a good book, I won’t argue that. Abnett’s prose is tight, his grip on characters and plot are great. A lot of the names are familiar to me by reputation, but there are unfamiliar ones too. Though I went in knowing the broad strokes of Eisenhorn’s tale, the twists and turns of Xenos kept me guessing. An entertaining way to spend a few hours. Like a lot of the earlier Black Library releases, there’s a very pulp sensibility to things. Blood splatters acros the page, characters snarl and bark. Larger-than-life figures lurch and lumber through implausible actions.

And yet. When a book is as famous as this, you can’t help but build up an image of it in your mind. No matter how good a book is, it’s almost impossible to live up to that reputation. Xenos, like many others, is a victim of its own success. At least it is for me. Short of goin into every book blind, I don’t really see a counter for a problem of this sort. But now that I have an accurate baseline to work on, I’m more excited than before for book two. It’s not that there was anything wrong with Xenos, it’s that my expectations were too high. Yes, it’s a tad unfair, but these things still have an impact.

If you’ve heard of Xenos, you’ve probably read it. If not, then dive right in. It’s a great little book, and one of the best jumping on points for the Warhammer 40,000 universe.