-spoilers for The Lost Puzzler– 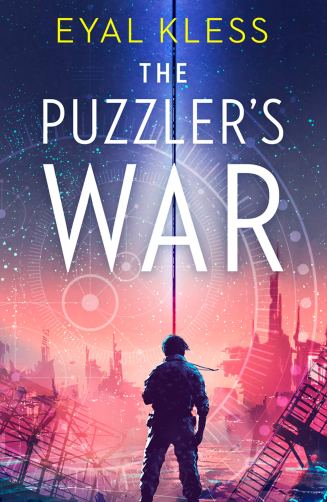 Centuries from now, the world lies in ruins. Across a wasteland marked by radiation and ruins, the survivors of humanity fight over what little is left. But while some do so in search of power, others have larger goals. Some even strive for a better world, and perhaps the Tarakan Corporation is not as dead as everyone thinks . . .

Like its precursor, Eyal Kless’ second instalment in the Tarakan Chronicles series is a difficult book to define. It skips through genres merrily, leaving a trail of destruction and wonder in its wake. Whereas The Lost Puzzler was perhaps best described as a post-apocalyptic tale written as a fantasy novel, the sequel leans more heavily into the science side of things, resulting in a book which is tonally different to the first, yet succeeds on building on what had gone before to create an even more impressive result.

The Lost Puzzler ended fairly inconclusively and at the time I was unsure if there would be a follow-up. needless to say I am extremely glad there is, as The Puzzler’s War not only answers many of my lingering questions, it also answers some I didn’t know I would be asking. As well as continuing to develop characters from the first novel, with the opening chapters resurrecting some who had died, Kless expands the cast to cover a diverse gathering of souls from across the ruined future wasteland. From roaming bandits, to supertruck drivers to mercenaries, everyone has their moment in the sun. And not just the main characters, but the side players too. Even characters who only appear for a few chapters are well-developed and, above all else, believable.

While the fist book was focused on people trying to make a living in the ruins of civilisation, book two is very much concerned with the sins of the past. everyone has their burden to bear, whether it’s Twinkle Eyes and his second chance at life, or Peach and her uncertainty over the morality of her cause. But it is in Mannes that we get our best character. Here is a man who witnessed the fall of civilisation firsthand, and lives with the memory of his role in the end of days. An evil overlord to some, a tragic figure to others, his chapters take us from the end of our world to the birth of Kless’ creations, and it’s a brutal and brilliant journey from start to finish.

The Puzzler’s War covers a lot of ground, both physically and thematically.  Whether it is right to sacrifice a child to save the world, an escalating war between rival Artificial Intelligences, the messy lines between civilisation and barbarism. It’s all here, and given room to breathe. Yet for all that is going on, it’s never a difficult book to follow. Even with its significant length, the pages fly by and you’ll be left wanting more. Particularly after the climax, which heralds yet another shift in genre, one that I genuinely cannot predict where it will end up.

A hybrid of countless genres with a strong storyteller at the helm, The Puzzler’s War is one of the best and most unusal novels of the year.