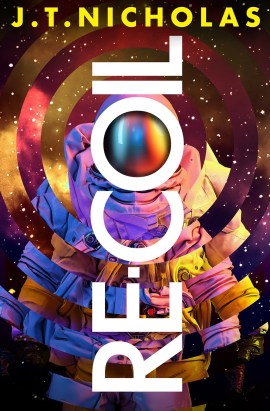 Carter Langston is dead, but that’s not his biggest problem. With his consciousness loaded into a new body, the salvager finds himself targeted by assassins. Whatever he saw before he died could change the world, and his only hope of survival is to find out what it was . . .

Crime and SF have gone hand-in-hand for decades, from the robot mysteries of Isaac Asimov to the brutal noir of Richard Morgan. Something, and I don’t know exactly what, ties these genres together in such a way that a single book can be the perfect example of both. But while there are hundreds of books which feature crimes in SF futures, the best are those that put a uniquely science fictional twist on things. Re-Coil is one such book.

Comparisons between this and Richard Morgan’s Altered Carbon are as inevitable as they are appropriate. Both are set in a human colonised solar system, and feature violent murders as their instigating acts. And that’s before we get to the central premise of these books. The idea that the human mind can be transferred between bodies, so that death is no longer the end. But there is one important difference. Whereas Morgan’s stacks are transferred after death, in Nicholas’ vision of the future the mind is backed up regularly. When a body dies, so does the mind, but a previous version can be reloaded into a new and specially grown body, known as a coil. Nicholas’ future is also a more equal one, with even the poorest having access to what amounts to immortality. I will say that I’m less convinced than some that the ability to re-coil amounts to immortality, but the idea of branching lives is a brilliant one, as is the central concept of a man trying to solve his own murder.

This is a fast paced book, and one that continually throws new balls into the air. What starts as a mystery soon grows into a spy thriller, as is the way of things, and there’s not a slowdown in sight. Even if death is not the threat it once was, there’s still a good sense of tension, and the violence has consequences. Nicholas also balances character building and action finely. Without going into spoilers, let’s just say that not everyone is happy when they are re-coiled, and that minds and bodies do not always match up as they should. Though very much and action-focused book, there are plenty of opportunities for the characters, and the readers, to breathe.

As well as the titular re-coiling, there are plenty of other ideas being thrown into the pot. Personal AI assistants accompany our protagonists everywhere, coils can be grown in many shapes and forms. Nicholas’ colonised solar system is sketched out in some detail, with airtight habitats being the only way to survive on hostile planetary services. The science leans pleasantly toward the hard end of the scale, at its most evident in the zero-gravity fight scenes. The corporate-dominated future is plausible in too many ways to count, and I loved every page of it.

Re-Coil carries on the excellent tradition of SF and Crime walking hand in hand, while also creating an intriguing universe for further exploration.

One thought on “BOOK REVIEW: Re-Coil, by J.T. Nicholas”