Welcome to the latest edition of TBR & BEYOND, a new regular feature where I take a look at my TBR, run through my reading plans for the month ahead, and talk about science-fiction related things I’m excited about for the coming month. A fair bit of this is similar to the previous month, but I’ll do my best to keep repetition to a minimum. Without further ado, let’s get into that TBR. 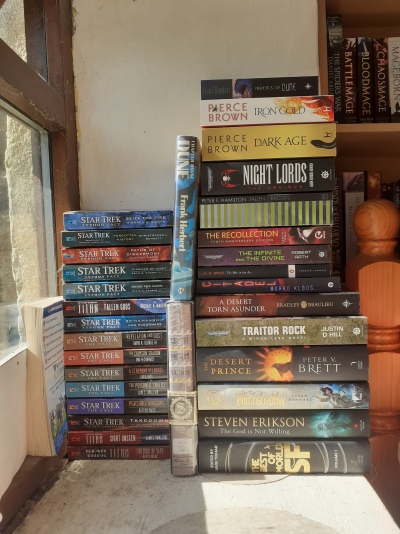 The TBR Tower continues to shrink as we get into the tail end of the year. I’m managing to buy less than I read, meaning I’m getting through the backlog induced by my Star Trek bulk buys early in the year. The biggest addition for September is a group of fairly sizeable fantasy novels. I don’t want to burn out on SF, so I’ll be sliding these in as palate cleansers over the coming months.

Returning to those Star Trek books, I am deep in reread territory now, and plan to finish off the Typhon Pact series by the end of the month. The upcoming Coda trilogy has been delayed by a few weeks, so I’m no longer worried about falling behind. I plan to read the five The Fall books back-to-back, but that likely won’t happen until the start of October. The slightly lighter Star Trek reading this month should allow me to get into other books.

Speaking of rereads, September marks the end of the Frank Herbert section of my epic Dune reread. Heretics is another one I didn’t enjoy much the first time, but Chapterhouse is a solid climax to the original six books. After that, it’s only the final two Brian Herbert/Kevin J. Anderson books to reread, and my obligations are fulfilled, but that will almost certainly wait until October.

I’ve also got a fair few Warhammer 40,000 books still sitting in my TBR. Night Lords will again have to wait a month, but I do plan to read Cadian Honour in September. The same goes for Robert Rath’s The Infinite and the DIvine, which earned rave reviews when it came out in hardback last year, and I have been looking forward to ever since. It’s been a while since I read something focused on the Xenos, and the increased number of Necron books announced has me very excited.

After the rather disappointing Morning Star, the next two Pierce Brown books have fallen well down my priority list, where they sit with the other massive tome Fallen Dragon. The Best of World SF Volume 1 is also down there, because I want to get through some of the slimmer tomes on my TBR. The Recollection by Gareth L. Powell is my priority, but last month I also picked up an H.G. Wells classic The War in the Air, and Marko Kloos’ Citadel, which is not the end of the trilogy as I was mistakenly anticipating, but will bring me up to date with another series, which is always a victory in its own right.

There’s one big September SF release to talk about, and it’s one I’ve been waiting years for. Foundation has finally been adapted for television. I’ve seen all the trailers and incredibly excited for this. It looks spectacular, and what I know of the changes all make sense. The only issue is that it’s on Apple TV+, which means shelling out some extra cash. I’m perfectly willing to do it, but I wonder how successful the show will be. Time, as always, will tell.

Onto the books! There are three books on my list out this month, and they’re all due out on the same day, so put the 21st in your calendars. The biggest release is the new Dune novel. The Lady of Caladan is a sequel last year’s The Duke of Caladan, and is of course written by the partnership of Herbert and Anderson. Also out of the 21st is Stolen Earth, by J. T. Nicholas. I was greatly impressed by Re-Coil, and hope this new (unrelated) book is at the same high standard.

The final release of the day is the one I’m looking forward to the most. Anderida Books, who are my primary source of limited editions, are releasing The Lesser Devil & Other Stories. This collection of Christopher Ruocchio short fiction includes the novel of the same title as well as a host of stories appearing for the first time in print, or just outside of assorted anthologies. Ruocchio is my favourite currently working author, and based on the handful of shorts I’ve read, this looks to be a stellar collection.

Though there is of course no official word from Black Library, I’m expecting some new releases in September. Word on the street is that Marc Collins’ debut novel in the Warhammer Crime range might be out towards the end of the month. Fingers crossed that Grim Repast can live up to the standard set by the rest of the range.

What about you? What SF are you looking forward to reading in September? Let me know in the comments.