BOOK REVIEW: The Robots of Dawn, by Isaac Asimov 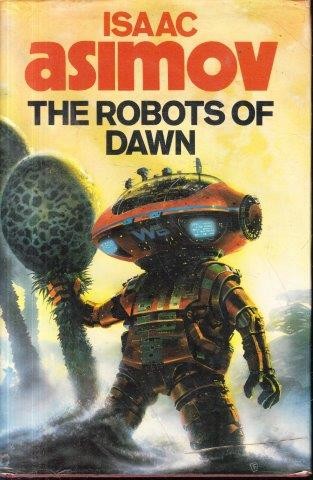 Once more, Earthman Elijah Baley finds himself sent into space to deal with a crime that could have far-reaching consequences. But on the Spacer world of Aurora, not everything is as it seems. And can it truly be considered a murder, if the victim is in fact a robot . . ?

The third volume in Asimov’s Robot trilogy is a remarkable book, not just for what it is, but what it represents. This was written at the point where Asimov was pulling together his various works to create an overarching future history in the form of the Foundation universe. While other books covered in this reread have contained hints as to what is to come, with some references to what has gone before, it is with The Robots of Dawn that these links become explicit. For the first time, there is confirmation that both Susan Calvin and Andrew Martin exist in the same timeline as Baley and Olivaw. As with any series that is put together after the fact, there are inevitably a few wobbles in the continuity, and so these famous names are regarded as legends and fairy tales. Not only does it tie together the robot-centred short stories that preceded it, it also looks ahead. The phrase ‘psychohistory’ is mentioned, only a few times in passing, but its significance will become clear in later books (which had already been published at the time). There is much discussion over the forms a Galactic Empire might take, and the potential roles of humans and robots alike in founding and managing it.

Yet for all that it establishes a greater continuity, The Robots of Dawn never forgets that it has its own story to tell. The ‘murder’ of R. Jander Panell is a classic Asimov mystery. A crime with only one possible perpetrator, who recruits Baley to prove his innocence, all while claiming he was the only one who could have done the deed. In typical Asimov style, a series of suspects are confronted, accusations are thrown, and eventually the truth is revealed. It is formulaic, but with so few novels in the series the formula remains entertaining without outstaying its welcome. What is most impressive is how the pace is sustained across a book that is over twice as long as its predecessors. The Robots of Dawn may not be a huge book by modern standards, but it’s the longest book of this reread so far. But at no point does it drag. The pacing and plotting are simply superb, and with Asimov’s accessible writing style it will only take a few days to complete.

As well as chronicling a gripping investigation, The Robots of Dawn also continues to build a universe. The world of Aurora is as real as our own, with its own unique society. this social worldbuilding is one of Asimov’s strengths, and though different to our own it never feels unreal. The arrogance of the Aurorans is only natural as the first of the Spacers. So too, their rather enlightened approach to robots, treating them, if not as equals, then certainly better than the other worlds. A large portion of the novel is given over to the nature of sexual relations on Aurora, which of course plays a significant role in the novel. Nothing, however odd or inconsequential it may seem, is ever wasted in an Asimov novel.

While a great murder mystery in its own right, The Robots of Dawn finds its real strength in tying together the Foundation universe, heralding the greatness that is yet to come.

One response to “BOOK REVIEW: The Robots of Dawn, by Isaac Asimov”