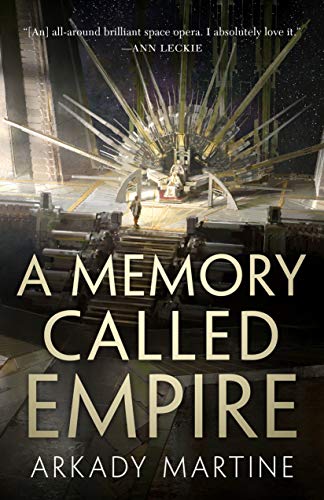 Mahit is the new ambassador to the Teixcalaanli Empire. With her predecessor dead, likely murdered, and a war brewing, it’s going to be a rough assignment…

As a general rule, I find that you can judge the quality of a book’s worldbuilding by the size of its appendix. With a full glossary and a pronunciation guide, A Memory Called Empire has a lot of promise, and the book more than lives up to it.

The Teixcalaanli Empire is one of the most vividly realised foreign cultures I’ve encountered in recent years, if not longer. It manages to be both human and utterly alien. Their focus on poetry is wholly original, and I’ve never been so glad to have sat through three years of poetry lectures, because I found the poetry both complex in nature, but easy to read. And having an entire society encode messages through the medium of poetry simply to show off their intellect is as hilarious as it is insightful. It’s a line that Martine herself walks carefully. This is undoubtedly a very clever book, and manages to be so in an earnest and enthusiastic way, rather than coming across as boastful or arrogant.

This is, above all else, a deeply political novel, in both sense of the word. First up, it is a straight political thriller. In between dead ambassadors, meetings with foreign diplomats and formal lunches, there’s still time for murder investigations, espionage and potential civil wars. Compared to some works, A Memory Called Empire is fairly lean, but there’s not a page wasted. The plotting is tight, the character work faultless, and it has all the tension of a James Bond film – and it’s not lacking in gadgets either.

The other political side requires a deeper reading. This is a novel about Empires, and is rooted in real-world conversations and debate. The Teixcalaanli Empire is a seductive beast, its culture dominating all others. Mahit’s own home, Lsel Station, is quite clearly a lesser power, at least politically. And so we enter the discussion around colonisation. It’s a tricky subject to write about, for a number of reasons. While I can’t say that I agree with all of the politics Martine presents here, her portrayal of a kind of societal Stockholm syndrome is a fascinating one. The Teixcalaanli Empire is a wonderful thing, even as it perpetrates all manner of horror upon its enemies. While Lsel Station is very much the more innocent party, it’s hard not to agree with some of the Empire’s points. I suppose that’s rather the point.

One thing I feel Martine deserves more credit for, that I have not seen in other reviews, is her use of epigraphs. These are one of my favorite things to see in books, so you can imagine my joy when each chapter starts with a pairing of them. One from Teixcalaan, one from Lsel Station. They cover a wide spectrum of ideas and sources. From private musings to public broadcasts. There’s also the first time I have ever seen the script from a fictional graphic novel being used in this way.

A Memory Called Empire would be a brilliant book under any circumstances. But as a debut, it is nothing short of astounding.