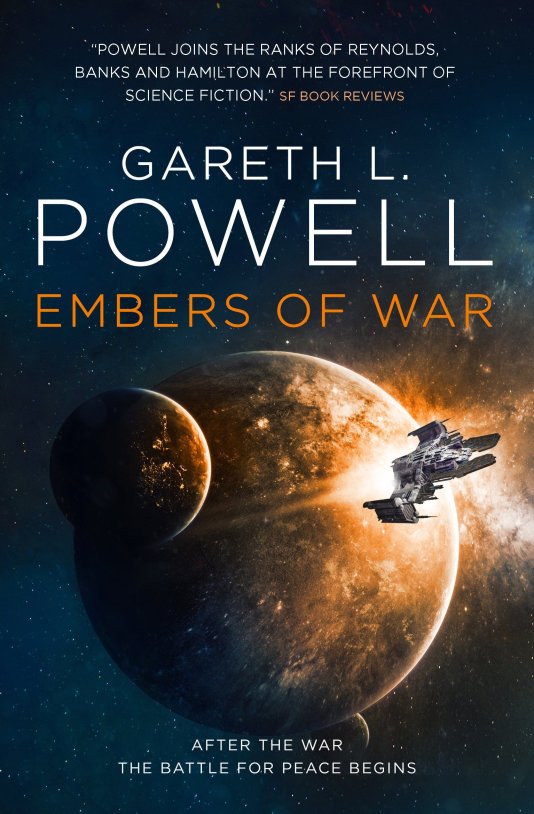 The war is over, but for the crew of Trouble Dog, and the ship herself, the struggle continues. Because without war, what good is a soldier?

Iain M. Banks is a towering figure in SF, respected, praised and generally loved. But when I see his name in a blurb, when an author is compared to him, it generally turns me off the book in question. There’s just something about his subgenre of space opera that rubs me the wrong way. The post-scarcity, transhuman, AI ships who are human in all but shape worldbulding just doesn’t do it for me. Embers of War uses many of the same tropes and storytelling tics as Banks, but to much better effect. This isn’t reminiscent of Banks, it’s an improvement on him.

Embers of War follows the intelligent warship Trouble Dog, now working for the House of Reclamation, an order of scavengers and good Samaritans who travel the Galaxy doing good deeds. But Trouble Dog is also haunted by the massacres she perpetrated during the war, trying to atone for them by helping others. In this, she is similar to her crew, almost all of whom are former soldiers from the sae war, though not necessarily from the same side of the conflict. The crew are rivals as much as friends, and there’s a real Killjoys vibe running through the book, which is never a bad thing.

In fact, for a book largely about trauma and the lasting damage caused by war, Embers of War is surprisingly hopeful. The characters aren’t afraid to crack a joke, even in dire circumstances. But it doesn’t cross the line into outright comedy either. The characters take themselves seriously, just as real people do. And while the worldbuilding is fairly standard, the characters are, generally speaking, a lot of fun to hang around with. They’re interesting, diverse, and complex. Everything you could hope for in a fictional character.

With regards to the worldbuilding, there isn’t a whole lot to say. Much of it is painted in broad strokes. There are several political entities, made up by the members of various human groups and alien races. The aliens never feel truly alien, but then we don’t see all that much of them. Nod, the only alien in the main cast, is at least noticeably not a human, and Powell avoids the Star Trek problem of aliens being humans in funny suits with bumpy foreheads. But the worldbuilding never feels particularly deep. There’s a lot on the surface, but very little deeper down. Aside from the one mystery that drives the plot, there’s no real sense of history.

That’s a minor concern though. As the first of a trilogy, Embers of War does a stellar job of setting the scene and introducing its main cast. There’s scope for growth, and that’s probably better than being bogged down in details so early on. It probably won’t take you long to read, but you’ll definitely want more afterwards. It’s addictive, popcorn SF, and there’s nothing wrong with that. Sometimes, a little lighthearted fun is exactly what you need from a book.

Overall, a promising start to a new trilogy, and a story that will soon be completed.