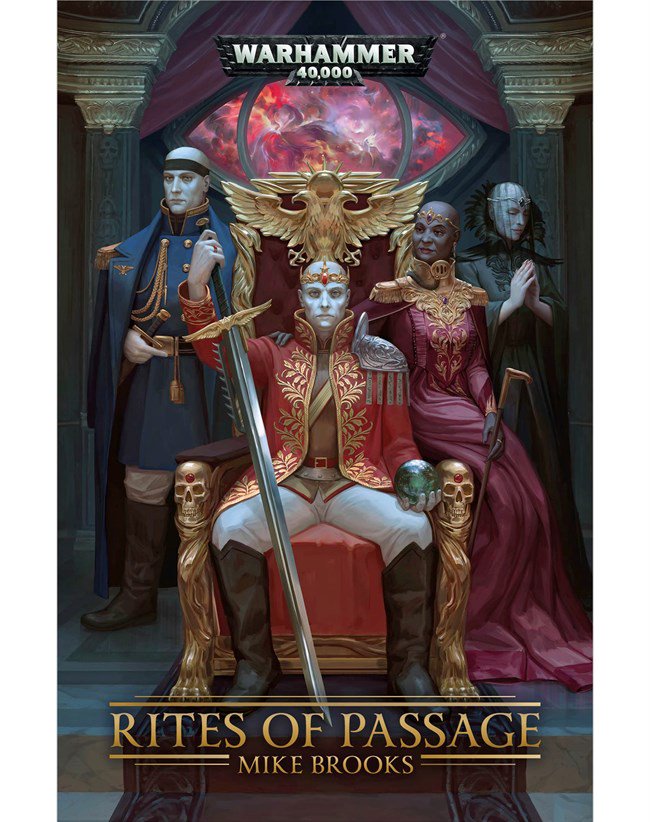 Her husband dead (by her own command) Chettamandey Brobantis faces an uphill battle to emerge as the new leader of her Navigator House. And when planets start disappearing, things only get more complicated . . .

Mike Brooks’ debut Warhammer 40,000 novel is a brilliant weaving of grimdark cultists and family politics. The inner workings of the mysterious Navigators is a realm seldom explored in the military-focused offerings from Black Library. And while it is generally the military side of things that draws me in, Rites of Passage is a breath of fresh air in more ways than one.

By writing about a region so seldom explored, Brooks is able to tread new ground. An impressive feat for a setting with two decades of fiction to its name. It’s also fairly self-contained. There are references to events in the wider Imperium, and a prequel short story can be found in the recent Underhive anthology, but none of that is required reading. Even if you are absolutely new to Warhammer or the Black library, you could pick this off the shelf and dive right in. Could, and definitely should.

But just because it is a standalone, doesn’t mean the stakes are any smaller. It’s no mean feat to remove a planet from existence, even in the fantastical 40,000 setting. So when it becomes clear that Chetta’s own homeworld may be next, the pressure is on. For such a short book, there are a lot of plot threads operating simultaneously. The war for inheritance and the threat to the Navigator’s planet are just the major ones. There are countless interpersonal conflicts being thrown around too, but none of them ever feel inconsequential. This, more than any other Warhammer novel I’ve read recently, thrives on the relationships between its protagonists. And its antagonists too, for that matter.

I’m familiar with Brooks from his Keiko trilogy, and I have to say his writing is a perfect fit for the Warhammer setting. The action scenes are faultless, the pacing brisk, and the threat is ever-present. This isn’t the sort of book where you know everything will be fine in the end, even if you do sort-of know that there will be no major upsets to the universe without Games Workshop advertising it thoroughly beforehand. But when the shooting starts, the larger threats take a back seat. Brooks’ characters are likable enough, in a roguish sort of way, that you’ll care more for them than yet another planet-destroying disaster.

One final point I would like to make, is the diversity on display here. being based on a game of mass-produced metal soldiers, the Warhammer universe has historically tended to be fairly homogenous. But no more. In Rites of Passage alone, we have at least two openly gay characters, and Chetta herself is (and I hope I’m reading it correctly) an elderly black woman. Quite far from the protagonists you might expect of the grim, dark future. But what matters is not that they are there, it’s that nothing is made of it. These characters simply exists. This, ladies, gentleman and others, is diversity done right.

Rites of Passage is amazing, both as a standalone and a part of the wider 40,000 universe. The only problem, is that there isn’t more of it.

4 thoughts on “BOOK REVIEW: Rites of Passage, by Mike Brooks”