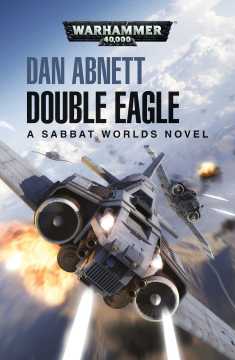 The Phantine XX are the Imperial Army’s elite flight unit. But even they cannot hope to stand against the forces of Chaos for long. Fortunately, they are not alone. Unfortunately, neither are the enemy.

Action in the Warhammer 40,000 setting is generally confined to the ground. Over the past two decades, the game has cornered the market in dieselpunk science fantasy amid the stars. Wars are fought in trenches, millions of men march to their deaths through muddy fields, and if a spaceship turns up it’s probably going to exterminate the planet from orbit. In Double Eagle, Dan Abnett shows another side to the war. The war in the air.

Set in the Sabbat Worlds, and taking part around the same time as books 4-6 of Gaunt’s Ghosts, Double Eagle is rightly regarded as a classic by many 40k fans. Out of print for many years, this book has finally been reissued to coincide with the new Aeronautica game from Games Workshop. Aside from the brilliant new cover, nothing about the book has changed, and it’s just as brutally classic now as it was fifteen years ago.

Dogfighting has been a mainstay of SF since Star Wars was released in 1977, particularly when it comes to film and television. The most famous literary example is probably Michael Stackpole’s and Aaron Allston’s X-WIng series, but there are a few others. What separates Double Eagle, is that it is far closer to the World War Two actions that inspired George Lucas. These fighter pilots are limited by the edge of a planet’s atmosphere. Refuelling and landing for repairs are important components, as are the troops on the ground below. Dogfighting and bombing are both covered in all their unglamorous detail. Abnett’s eye for action is unquestionably one of the finest in the genre. This is a book where you can smell the smoke from the explosions, feel the wind on your face, and the tang of fuel gets caught in your throat. It’s a book that pulls you in by the throat and refuses to let you go.

With his longer series, Abnett proved himself the master of getting readers invested in characters before ruthlessly killing them off. While you can’t really compare a fourteen book series and a standalone, his talent with characters is on full display, and you just know that a single bullet is all it will take to end someone’s time on the page. With so many bullets flying, and a lot of characters around to catch them, there isn’t a single point in the book that anyone feels safe. And that’s exactly how a war-story should feel, particularly one in the grim dark future.

It would be easy to criticise Double Eagle for being light on plot, but honestly? I think a deeper plot would weigh the book down. This is the story of a single episode of a larger campaign, told over about a fortnight. The enemy is coming and we must stop them. Really, that’s all the plot you need for a book like this.

If you’re into your wargaming, this is a book you cannot afford to miss. If you’re not, it’s still a cracking story.