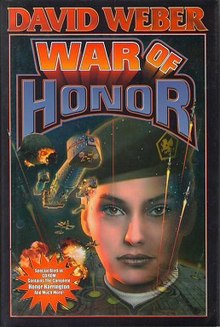 For the first time in nearly two decades, there is peace. The fragile truce between haven and Manticore is holding, for now. But while the negotiations are ongoing, some find themselves wondering if a return to war is inevitable . . .

Somewhere in War of Honor, there is a good book. A gripping tale of political brinkmanship, shady political dealings and paranoia. That is the book I would have liked to see. It is not, however, the book I got. Because that book is drowned in the near-thousand pages of War of Honor. This book is the very definition of the word bloated.

Which is a shame, because there is a lot about this book to like. We get a return to the Andermani Empire and their exploits in Silesia. We see a Havenite leadership that genuinely wants change for the better, even if they’re not sure how to go about it. These are undoubtedly the strongest parts of the novel, as they tread new ground. The same cannot be said for Manticoran side of the story though. Once again we have corrupt and incompetent politicians grinding down the heroic military. there’s nothing wrong with this storyline, it’s just that we’ve been down this road so many times before. perhaps in a shorter book this could have been overlooked, but a tome of such weight ought to bring more to the table.

I’ve said before that any long-running series will sooner or later run into this sort of trouble. How can you maintain a long series without either growing repetitious or fundamentally changing what the series is about? I don’t know, but it feels like Weber doesn’t either. Now that the Honor Harrington series has entered the double digits, it’s a problem that needs to be dealt with.

There’s little more I can say about this book, but I would like to note that from here the Honorverse effectively splits into three series. The main Honor Harrington line, the Saganami spin-off and the crown of Slaves series with Eric Flint’s co-authorship. Hopefully this diversification means that future books will feel less overstuffed. A return to the more focused storytelling of earlier installments would very much not go amiss.

I’ll be continuing my (roughly) chronological read for some time yet, and I really do hope that Weber can recapture the spark that has dimmed with recent books.

One thought on “BOOK REVIEW: War of Honor, by David Weber”