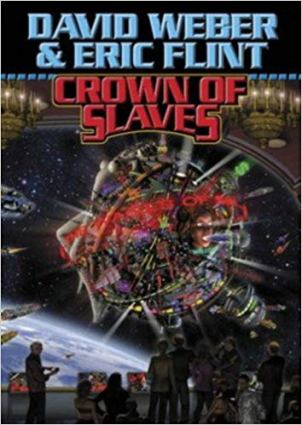 The nation of Erewhon’s ties to Mantciore have never been weaker. Overlooked by the current parliament, rebellion is brewing. As both Mantciore and Haven send their spies to work, could a new threat be rising . . ?

This right here is the shot in the arm that the Honorverse needed. As if there wasn’t enough happening in War of Honor, this book actually takes place within the same timeframe, albeit light years away from the main action of the Honorverse. For the first time, we get a look at Erewhon, the lesser partner in the Manticoran alliance who is, quite rightfully, resentful of that status. This change of setting of course means several new characters. Some are familair, either from name-dropping or appearances in previous Honorverse books, but none of them have been major players before. Honor Harrington herself makes an appearance, but it is little more than a cameo.

It is this distance from the ain series that makes Crown of Slaves feel like such a breath of fresh air. More than just setting and cast, the genre has changed too. The military aspect that has thus far defined the Honorverse is much reduced here. In its place we get more personal action, and fast-paced espionage and treachery. Such a sudden shift in genre would have been odd for Honor Harrington, but as a spin-off it’s the perfect blend of new and old, offering something different while still being in keeping with what has gone before.

Of course, this is not just the work of Weber alone. I haven’t read any of Eric Flint’s other works, but this very much feels like a Flint novel rather than a Weber one. the pacing is faster, there is less military jargon. The action is less detailed, but somehow crisper. In short, the style nis incredibly readable,a nd what more could you want than that? My sole complaint is Flint’s tendency to drop letters when writing character’s accents, which can occasionally be jarring and disrupt the otherwise strong flow of the novel.

Largely due to its chronological place in the larger universe, there are few surprises in store here. the larger revelations have already been revealed or alluded to in War of Honor. But the journey is almost as exciting as an unknown destination. With a smaller cast than previous books, spread fairly evenly across the three nations in play, there’s a lot to like here. I’m hopeful that other books focus on these same characters, as they are a joy to read.

The most important gift tis book has to offer is a chance to relax after the weightier books in the Honorverse. Even at 710 pages, it feels a lot shorter. Not necessarily light, but certainly less heavygoing than others in the series. I think this shows the strength of having spin-offs. A detox that takes you on a wild ride, then drops you off with a renewed interest in reading more.

Crown of Slaves may not be the best book in the Honorverse, but it is a very good one, and opens the gateway for plenty more to come.