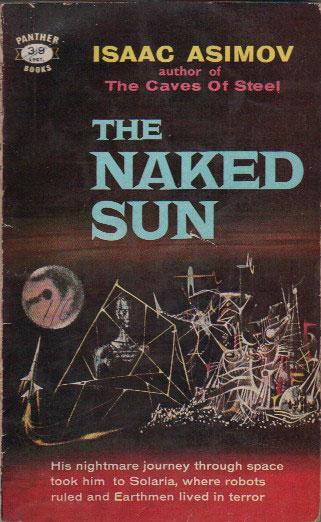 Elijah Baley is back at it again. Reunited with R. Daneel Olivaw, he is tasked by the Earth government with solving a most unusual murder. But his investigation will take him far from home, to the planet Solaria, where robots outnumber humans, and even the people are strange beyond reckoning . . .

The Naked Sun builds on both The Caves of Steel and the short stories of I, Robot and other anthologies to deliver an Asimov classic. Whereas in the first novel in this series was a fairly traditional murder mystery which used robots as set pieces and side plots, here is where robots take front and centre stage. R. Daneel Olivaw remains the only android-style robot, but the Solarian models are sophisticated nonetheless. Indeed, large parts of the novel are given over to detailed discussion on the science of robotics, both on a technical and a social level.

This book is also where we see the real differences between Earthmen and spacers. Though some of the spacers’ germaphobia was obvious in The Caves of Steel, the Solarians take it to the next level, living alone on massive estates tended to by legions of automated staff. Such is their isolation that the mere thought of human contact triggers anxiety attacks. Living through the present Coronavirus pandemic, it’s all too easy to see how a society could reach such a point. Not that this would be a bad thing. As ever, Asimov merely shows a world as it could be without passing judgement. The lengths to which Solarians go to avoid contact with one another are as inventive as they are incredible.

Though barely longer than a novella by modern standards, The Naked Sun is a triumph of worldbuilding. From the opening pages, there is little that is said or done that does not develop the setting further. Yet this is never plain exposition. As an investigation, everything Baley learns is woven naturally into the dialogue. And it is not simply worldbuilding for its own sake, as every piece of information uncovered proves to be crucial to understanding the murder in question. On this reread, I remembered many of the elements that make up the mystery, as well as the fate of one of the characters, but even so there were just as many aspects I had forgotten. In particular, the wide-ranging social impact of the murder was as surprising to me now as it was the first time around.

Baley and Olivaw spend much of the novel apart, and with the narrative tightly focused on Baley, his robotic partner’s doings are largely left off the page. The new characters introduced here are standard murder mystery archetypes, all with a science fictional twist. All serve their purpose in the narrative elegantly, but none are particularly memorable. The most remarkable is Gladia, who will play a significant role in the rest of this series.

All told, The Naked Sun is a cosy mystery to challenge the mind, well wrapped up ans setting the stage for larger events ahead.

One thought on “BOOK REVIEW: The Naked Sun, by Isaac Asimov”