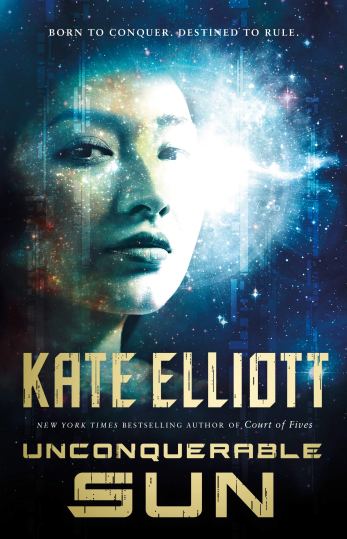 The Galaxy has fallen into an age of darkness. Amid the chaos, the Republic of Chaonia stands firm against its many enemies. With war once again on the way, young Princess Sun is determined to make a name for herself . . .

When a book advertises itself as ‘chonky absolute unit space opera,’ I stand up and pay attention. Unfortunately, while this is a strong book, it’s not the one that was advertised to me. I’ll go into that in a minute, but for now, let’s look at the positives.

First up, I love the worldbuilding in this. Fallen empires and Galaxies in ruins are always a good bet as far as I’m concerned, and Unconquerable Sun conveys the sense of lost civilisation very well. The idea of beacons being used to calculate hyperspatial travel, and those beacons falling into disuse is an interesting one. This also adds a nice tactical element to imperial expansion, with travel only possible along certain routes, thus making select planets vital in terms of border security.

Princess Sun’s struggles are explicitly modelled on the life and conquests of Alexander the Great, and much of the Galaxy has that same Classical feel. Like a lot of traditional space opera, there’s a real feeling that this is a fantays story transposed into space, and one of the ones that works the best. Elliott is a great worldbuilder, and the historical influences lend it a credibility that a lot of other series lack. I’m passingly familiar with the more famous parts of Alexander’s legend, but not to the extent that it interfered with my enjoyment of the book. If there are any direct lifts that improve or worsen the book, I’m not the person to speak of them.

Now, back to that issue I alluded to earlier. The book advertises itself, both in marketing and in its blurb, as the story of Princess Sun. But this isn’t really true. The majority of the book revolves around Persephone, one of the many people in Sun’s orbit. Had I known about this going in, it probably wouldn’t have bothered me all that much. As it was, however, I kept wondering when we’d be back to the person who should have been the main characters. There are a few other viewpoints alongside Sun’s and Persephone’s, but they get little focus in the overall story.

This leads to the other problem I had. The tense changes multiple times throughout the book. Some chapters are written in first-person present tense, others third person past tense, with mixes of the two in other places. Now, each viewpoint character does stick to one tense, which is something of a relief. However, the chapters are just short enough that whenever I got used to one style of writing, that style was set aside for a few dozen pages. It leads to a reading that felt disjointed. This probably says more about my attention span than Elliott’s writing, but it is something to consider.

Despite my reservations, Unconquerable Sun is a good book, but don’t go in expecting to get what the rear cover promises.

One thought on “BOOK REVIEW: Unconquerable Sun, by Kate Elliott”