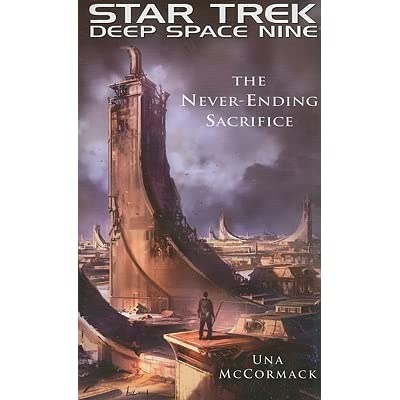 Born a Cardassian but raised as a Bajoran, Rugal has been ripped from his family by the misguided actions of Benjamin Sisko. Sent to a home he never knew, and a family he does not remember, Rugal faces the challenge of growing up in the most turbulent era Cardassia has ever known . . .

One of the best things an expanded universe can do is take minor characters from the original body of work and really flesh them out. We see this all the time in ranchises like Star Wars, where every patron of the Mos Eisley Cantina has full backgrounds and stories to their name. Yet Star Trek has tended to focus on the crews of starships. Natural enough, but even in the literary canon its the same names we see coming up time and again. Now, I love Bashir, Seven of Nine and Geordi la Forge as much as the next man, but every now and then it’s nice to see the expanded universe be just that: expanded beyond what we are familiar with. With The Never-Ending Sacrifice, Una McCormack has done exactly this.

As seen in the season 2 episode ‘Cardassians,’ Rugal’s background is an interesting one. A Cardassian child raised by a loving Bajoran family, only to be sent back to Cardassia with his biological family for what are laregly political reasons. It’s a story that deserved follow-up, and if we never got that in the show itself, we at last get it here. Taking its name from an in-universe novel, The Never-Ending Sacrifice follows Rugal for the next eight years of his life as he adjusts to his new reality. Along the way, we see the events of Deep Space Nine‘s full run from a decidedly different perspective.

Though a fairly short book, the narrative length of this story is its greatest strength. Chapters cover months, and the entire book spans about eight years. This allows the full scale of the story to become apparent, as Cardassia goes through multiple regime changes and wars. We see major characters like Dukat cross paths with Rugal, as well as minor ones and new faces created for this story alone. It all helps to ground the book in what we already know about the universe. Seeing the Dominion War from the perspective of a conscripted Cardassian soldier lluminates the horror of the conflict, while the peacetime sections show a new side to the militaristic society Rugal finds himself in.

It’s not perfect. The same close ties that strengthen individual scenes mirror Deep Space Nine so effectively that there is little in the way of surprises so far as the overarching story of Cardassia goes. While the inevitable tragedies heighten the oppressive atmosphere, it can be jarring when you know almost exactly what is about to happen next. Most readers won’t have this problem, but I prefer to be kept guessing just a little while longer.

Overall though, this is a very strong novel, a standalone that nevertheless binds itself to the TV series from which it is spawned. Definitely one for Deep Space Nine fans to check out.

2 responses to “BOOK REVIEW: The Never-Ending Sacrifice, by Una McCormack”