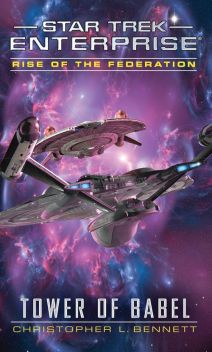 Series: Rise of the Federation (#2)

The Rigel system is as diverse as the Federation, and as troubled. Hoping to gain new allies, Jonathan Archer leads the mission to bring Rigel into the Federation. But not everyone is so keen on the idea, and Starfleet’s Admiral is about to discover just how dangerous politics can be . . .

Tower of Babel continues the strong work started by its predecessor, showing the early struggles of the Federation while also continuing the personal growth of the Enterprise crew. Bennett again proves that he has a good handle not only on the characters, but on the ethos of this era of Star Trek. One of the best things about Enterprise wa sthat it allowed its characters to fail, and often to make terrible choices. That is very much continued here. The Federation is still determining what sort of nation it wants to be, and the few morals it has agreed upon are put to the test here. However, don’t think this is some House of Cards political drama. The sense of hope and optimism that defines Star Trek is very much front and centre.

This is an Archer-centric novel, with Reed and T’Pol playing the major supporting roles. The split viewpoints do excellent work dividing the book between intrigue-laden politics and the more space opera stylings that Enterprise readers have come to expect from the Pocket Books continuation. Archer’s arc is powerful stuff, as Earth’s greatest explorer finds himself well out of his depth when it comes to negotiations. Bennett shines a light on Archer’s driven nature, continuing previous writers’ – not to mention Scott Bakula’s – work of making him one of Star Trek’s most human, and most flawed, captains.

Looking at the Rigel system as a whole, Bennett collects various and often contradictory pieces of established lore and blends them to create a unique and vibrant culture that serves as a perfect parallel to the Federation. The messy infighting and internal politics make a nice change from Trek’s frequent moncultures. I’m particularly grateful for the afterword in which Bennett lists the various episodes he has drawn on for his depiction of Rigel. It’s fine stuff, and I always like seeing how the sausage gets made, so to speak.

If I had a complaint about the book, it’s that some of the ongoing plotlines don’t appear to be going anywhere very quickly. The Orion manipulations in the background work well, building an adversary that I expect will feature more heavily in upcoming books. But the rise of Maltuvis and the Saurian sections of the narrative, while showing the many problems the Federation is facing, don’t contribute much to the oveerall narrative. At least not yet. There is also the fact that section 31 and Trip are still hanging around, which does sometimes feel like an inclusion just to complete the Enterpise crew roster.

Overall though, this is another strong novel in the Enterprise line, and it’s nice to see the book series establishing an identity, even if it won’t last for very long.

One thought on “BOOK REVIEW: Tower of Babel, by Christopher L. Bennett”