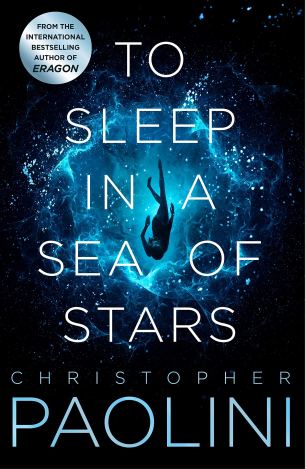 As humanity expands into the universe, it finds evidence that it is not alone. Nor is it the first species to come this far. First contact leads to a galactic war, and one woman finds herself caught in the middle of events she cannot possibly understand . . .

To get the obvious out of the way, Christopher Paolini is an author best known for his fantasy works. Now, I was the exact target audience for those earlier works, and it’s in no small part due to Eragon that I became such an avid fantasy reader. As you can expect, I was pretty excited when I learned that Paolini’s next project would be a science fictional work, and I’ve been following updates for what feels like years. This is a book that has been in the making for a very long time, and I will say right off the bat that this really feels like the product of over a decade’s work. It’s well-researched, it’s intricate, and the world feels fully realised. Unfortunately, I’m not the target audience for a book like this, and large parts just didn’t work for me.

Clcoking in at over eight hundred pages, To Sleep in a Sea of Stars is a behemoth of a book. It’s a standalone, but sets up something Paolini is calling ‘The Fractalverse.’ This is an approach I love. Individual stories in a shared world rather than a single story being dragged across multiple volumes. Truth be told, I’ll likely pick up the next Fractalverse book, even though this one didn’t hit the right notes for me. Because the setting is a very interesting one. It’s not often that I find a book that balances scientific rigour with the more action-driven stylings of space opera. Adrian Tchaikovsky’s Children of Time series is one of the few examples of this, and now I can add the Fractalverse to that short list. Paolini’s new novel deals with relativity, fuel economy and the realities of space travel in gratifyingly intricate detail. On a larger scale, it has plausible aliens and an exploration of the Fermi Paradox. Sometimes this does get side-lined in favour of action, but the basis is there, and it’s a strong foundation to build on in future books.

So, you may ask, if all this is so good, why didn’t the book work? You see, I’m not a character-driven reader. Characters exist to propel the plot and reveal the world, and for me, they’re only interesting in what they do and what happens to them. That is where To Sleep in a Sea of Stars falls short of the mark. For the entire book, we follow the same character, and while I have nothing against Kira, this does limit the narrative. The sheer scale of events is difficult to express through just one pair of eyes. In the first person, this could have worked to the book’s advantage, but I found that the single, third person perspective wasn’t up to the task at hand. I had a few other issues with the varying genre style and tone in the early section of the book, but a lack of cohesion was the real issue. if you read books for the characters, I’m sure you’ll get a lot more out this book than I did.

All told, To Sleep in a Sea of Stars is a book with a lot of promise. Though it didn’t work for me, it might do for you, and I’m still interested to see what Paolini delivers next.

One thought on “BOOK REVIEW: To Sleep in a Sea of Stars, by Christopher Paolini”