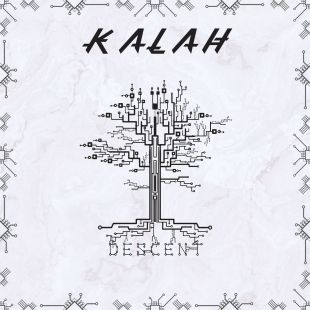 Kalah’s debut EP is an odd beast and no mistake. Even with my eclectic music taste, I’ve never heard anything quite like it. Even though it’s less than twenty minutes long, this feels like the band have thrown absolutely everything into it. Guitars, drums, and synthesizers come together in long instrumentals, while hard-edged female vocals belt out the lyrics. There’s fun, over-the-top musicality, but also real talent. It’s all a little bit glorious really.

Opener Mantis gives the listener a taste of what to expect. It’s only in the past few years that I’ve started listening to music from singers who have anything other than English as their first language, to the point that the standardised quasi-American accent is just what I assume to be the norm. And that’s not the case here. Lead vocalist Claudia Gigante’s Italian accent shine through from the first word, manipulating words in ways I haven’t considered before. There are times when my monolingual, half-deaf self can’t make out the odd word over the thumping music, but that’s not a criticism of the band, more a tragic reflection on my own rapidly deteriorating body (not to mention state of mind). there is an absolutely hypnotic quality to the song that hooks you from the start.

Titans of Dune is not, I believe, related to Frank Herbert’s series, but it might have accidentally become the soundtrack to my reread. This is a slower, more melodic song, showing early on Kalah’s musical range. From there we go straight into another style, with the anthemic Six feet Underground. This is probably my favourite song of the lot, and it’s exactly the sort of song I can imagine being played at a Sci-Fi convention, whenever those start back up. In fact, the band as a whole feel like they’d fit nicely into that niche overlap of metalhead and SF nerd. the perfect fit for this blog, in other words.

Closing the album is Sand, the most instrument-heavy song of the group. The riffs are catchy, but I’m not much of an instrumental fan, so this one did unfortunately fall a bit flat. Nevertheless, it’s as varied as the rest of the EP, and a fitting finish to a marvellously weird release. Descent is apparently the first of three EPs to be released by the band this year, and I can’t imagine where it’s going to go next, though I am excited to find out.

All in all, Descent is an EP full of promise, and serves as a fine showcase of a new band’s skill. But what comes across even more than their talent is the enthusiasm. Though I’m much more a literary fan than a musical fan, Kalah are definitely going on my ‘ones to watch’ list, and I would once again like to thank them for getting in touch. And hey, if anyone out there has recommendations for more nerd metal, do get in touch.