-Hold up! This is a sequel. Find my reviews of Red Rising and Golden Son here– 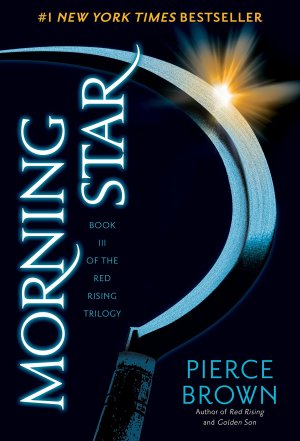 Darrow is a prisoner. As his rebellion rages on, he is tortured by those he thought he could trust. But this rebellion goes beyond one man’s anger, and if Darrow knows one thing, it’s the power of a martyr . . .

It’s taken me a while to write this review. Not just because of the usual busy work life, but because I haven’t been sure what to say about Morning Star. On the one hand, it’s the exact ending we’ve been heading for since Darrow first helped execute his father at the start of Red Rising. It’s grim, bleak, and full of betrayal. But on the other hand, it’s an infuriatingly lacklustre book that ultimately feels like it’s treading the same choppy waters as the previous two.

Back in my review of Red Rising, I commented that the book had all the contents of a grimdark novel, but with the delivery of a YA novel. Three books in, that’s still the case. The prose has an unfinished feel to it. If I were being charitable, I would it raw, but the truth is I was hoping for some change after a thousand-plus pages. The GravBoots and every other mashed together word just pull me straight out every time I see them. Obviously, if you include something in the first book, you’re kind of saddled with it for the rest of the series, but after three books, I’m just not as forgiving of the book’s faults. The less I think about the worldbuilding, the saner I stay.

The action sequences are as quick and brutal as ever, and remain the high point of this series. But this is a thick book, and after a few hundred ages, the relentless gore starts to grow wearisome. There’s not much depth here, which is fine if you’re after an action-fest. But with all the hype this series has received, I was hoping for more. The scope of this books is truly epic- a civil war raging across the solar system. We get everything from orbital drops to fleet combat to a world of cannibals. But we still only get Darrow’s limited perspective. This isn’t necessarily a bad thing. Such a tight focus can do wonders for character development. But after all he’s been through, Darrow’s personality can be summed up as ‘angry.’  The other characters fare little better, though Ragnar gets one of the best arcs.

As the final instalment of a trilogy, Morning Star is about what you’d expect based on the previous two. But that’s for the worse as well as the better. Much like Darrow’s rebellion, the Red Rising trilogy is peppered with missteps and stumbles, leading to a conclusion that is far less than the sum of its parts. If it weren’t for the fact I already own them, I’d probably not read the next trilogy. As it stands, I’ll be putting them off for a while. A long while.