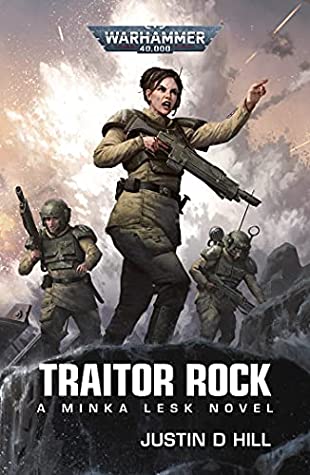 Cadia has fallen, but the Cadians themselves live on. Throwing themselves into war after war in search of an identity, the Cadians now face a seemingly insurmountable task. To breach the walls of the formidable Traitor Rock, and they have only fifty days to do it . . .

In the grim, dark future there is only war. Not only is this a perfect summary of Warhammer 40,000 as a whole, it also cuts right to the heart of what makes Traitor Rock such a phenomenal novel. Obviously, most Black Library books have war front and centre, but few of them go so deep into the psychological aspects as Traitor Rock. Hill doesn’t just show us battle after battle. he examines the toll that takes on the human mind. And he asks a very important question: When there is only war, how are you supposed to maintain a cultural identity?

This is the third book in the Cadia series, and the second to focus on Sergeant Minka Lesk. Like the rest of her people, Lesk finds herself a soldier without a home. This is a tragedy for everyone, but the Cadians have based their entire society around their ability to hold out against any enemy. Every Cadian is a soldier in some capacity, and even in retirement they return home to teach the next generation. But now Cadia is rubble, and there are no more generations. The Cadians have not only been given a bloody nose by Chaos, they’ve lost their future. They have no home, they have no children, they have nothing. Nothing except war. Because in the grim, dark future, there will always be war.

There have been a lot of sieges in Black Library, perhaps most notably in the Gaunt’s Ghosts novel Necroplis. Traitor Rock blows that one clear out of the water. Most siege narrative focus on the plucky defenders fighting against insurmountable odds, using crumbling defences to ramp up the tension. Not this one. Hill shows us the other side of the battle. Traitor Rock, more properly known as Crannog Mons is an island fortress widely believed to be impregnable. The perfect mirror to Cadia’s own reputation. So who better to break its back than the Cadians themselves? It’s the perfect opportunity to show that they can give as good as they got.

When it comes to the action, Hill does not pull any punches. Limiting the conflict to the siege of a single fortress does nothing to dim the immensity of the challenge. There are beach landings to rival D-Day, and the writing conveys every coarse grain of sand underfoot as the bodies pile ever higher. This is a book filled to the brim with the smoke and blood of battle. It is utterly immersive, and Hill writes military tactics like no one else I’ve read. Most of the book follows the characters fairly closely, but every so often Hill pulls the curtains aside to show the broader theatre of war in a way that feels like a history textbook. And that is meant as a compliment, because it drives home just what the stakes are here.

Yes, there is only war. For both humanity and the Cadians. But the Cadians are the finest soldier ever raised by the Imperium, and with no home to call their own, they make a new one in the heart of battle. The Cadia series feels fairly open ended, and I can easily see this rivalling and even toppling the famous Ghosts as the epitome of the Astra Militarum. Minka Lesk is a fascinating embodiment of the Cadian psyche, and the supporting cast each brings a unique perspective. Cadia may be gone, but while there are stories to be told, I hope the battle cry of ‘Cadia Stands!’ rings out for many books to come.

In short, I have nothing but praise for Traitor Rock, as Justin D Hill has crafted my new favourite Warhammer 40,000 novel.