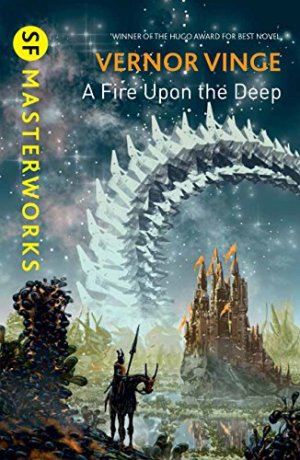 The Milky Way is a realm of vast potential. Not only in breadth, but in depth. For there is a force that suppresses intelligence, and as we travel further into space, we may reach our true potential. But when species and civilisations of incompatible intellect come into contact, can the result be anything other than violence . . ?

My science fiction reading covers two large periods. The Golden Age of the 40s and 50s, and the modern era of 2010 onward. That period in-between is one I’ve picked at a few times, but I have real gaps around the 80s and 90s. A Fire Upon the Deep is perhaps one of the most famous works from that period, and rightly earns a place in the SF Masterworks range. With such an evocative title, it’s no wonder this book gets talked about so much, and most of what I’ve seen about in online is positive. With all that as background, how could I resist? The answer, of course, is that I couldn’t. Though perhaps I should have.

Like a lot of classics, A Fire Upon the Deep is bursting at the seams with ideas. You could argue that it was easier to come up with new ideas back then, as there were fewer people to have beaten you to the punch, but even so Vinge’s imagination is impressive. First of all there is an acknowledgement of the sheer scope of space travel, with suspension chambers for ‘coldsleeping,’ and the human exploration of space is an aspect I would have liked to see more of. Ultimately, however, this is not a story about humans, it’s a story about the aliens.

The best of these aliens are the Tines. I don’t see hive minds enough in science fiction, and these are a good example of them. Sort of wolf-like in appearance and travelling in packs, each Tine is essentially a shared mind between the members of the pack. What makes the Tines really interesting is how the survive in the long term. To them, losing a member of the pack is like suffering a brain injury, as in the case of a pack that loses several members, with the survivors unable to communicate properly. But a pack can also heal by adopting new individuals into the pack. As an exploration of hive minds and the alien,  A Fire Upon the Deep is truly fascinating, but it’s less successful as a story.

The overall plot here is that two children are adopted by aliens, while an ancient and deadly entity seeks the annihilation of sentient life. Sounds exciting, right? Well, it wasn’t for me. Because there are so many ideas at play here, the story drowns in them. The shifting civilisation of the Tines is interesting, and so are a lot of the other ideas. But they’re all in competition with each other, rather than being complimentary. Any one of these ideas would be sufficient to drive a novel, and a good one at that, but when they’re all crammed into the same book, nothing has room to breathe.

Vinge’s prose doesn’t help with this. It’s dense, and there are shifts in style that can be hard to get your head around. Perhaps it’s testament to how well-drawn his alien characters are, that it’s difficult to understand what’s going on. There’s very little to latch onto. While this book may be mind-boggling, that is not always a good thing. Amazing and head-scratching are two sides of a coin, and this one is spinning non-stop.

A Fir Upon the Deep deserves its place in the science fiction canon, but if you’re coming for an entertaining story, you may be disappointed.

One thought on “BOOK REVIEW: A Fire Upon the Deep, by Vernor Vinge”