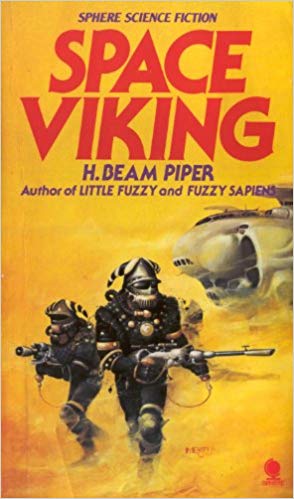 Thousands of years from now, the Galaxy is a barbaric place.

In the Sword Worlds, the petty nobles squabble amongst themselves, sending out raiding parties to the ruins of the Old Federation. These raiders, known as Space Vikings, are as feared as they are admired, and it is their endeavours that fund the expansion of the Sword Worlds.

Lucas Trask, a minor noble, is driven to become a Space Viking after the murder of his wife on their wedding day. Swearing to hunt down the man responsible, he takes a ship and a crew, and sets off into unknown space . . .

Space Viking is one of the first SF books I remember reading, and this marks the first time I’ve reread it. It must be at least a decade since the previous read, and so it was like rediscovering a lost treasure. The first thing that struck me is how much of my own philosophy toward creating SF worlds has been influenced by this book. The fallen empires, the roaming warlords, the retro-futuristic technology. Even small facts, like the direct light-year to hour conversion of hyperspace are so familiar to me that I had forgotten where I first encountered them.

Given its age – over fifty years old now – Space Viking has matured well. Some of it is hilariously outdated. The captain of a spaceship smoking a pipe while on the bridge, for example. But the spare prose and straightforward storytelling have held up better than some of Piper’s contemporaries’. The culturally stagnant future and it’s traditionalist foundations are an important part of the worldbuilding, and the references still hold up. Even though it is a little disconcerting to see our hero channeling the wisdom of one Adolf Hitler.

But then Lucas Trask is hardly a hero. He’s the sort of grimly determined mess of moral greys that have become so abundant in today’s genre fiction. I’m not sure how readers in the 1960s would have reacted to him, but he is perfectly at home in my library of more modern adventurers. While the murder of his wife as motivation is something of a cliché, the way his morality shifts is anything but. By the end of this short novel, Trask is almost unrecognisable as the man who left the Sword Worlds. From a modern perspective, I found it interesting that at no point is this commented on by his companions. His actions are never questioned for their morality, even when they cost thousands of people their lives. It’s not a matter of black and white, or even grey, a lot of the time. Simply a brutal recognition of how cold the world is. And how hard you have to be to endure it.

I didn’t realise until researching the background of Space Viking for this review that it was part of a larger series. While focused on different characters across different centuries, it’s definitely a series I’ll be checking out. if they’re even half as good as this one, then I may have a challenger for my all-time favourite series.

Space Viking is a forgotten classic, and one that desperately needs to be remembered. I simply cannot recommend it highly enough.