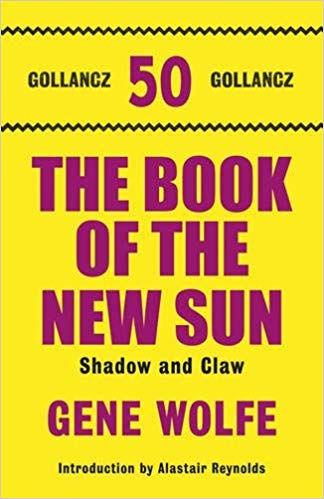 Severian is a torturer by trade, but that is not his nature. Exiled from his guild, he finds himself cast out into the strange landscape beyond the city he once called home . . .

Gene Wolfe’s Book of the New Sun, and the following series are undeniably important works of science fiction, and indeed literature as a whole. It takes the classic idea of the Hero’s Journey and mine sit for all it is worth. In a way, it’s almost a how-to when it comes to writing the archetypal coming-of-age, while still being innovative and stylistically unique. There is absolutely no way in which I can genuinely call this a bad book. What I can say, regrettably, is that I did not enjoy it.

The main reason for this is the writing itself. Going into the book, I knew of its reputation. The way it uses an unreliable narrator to create multiple layers to the narrative is something I’ve seen championed again and again. Unfortunately, I find Wolfe’s style of writing utterly impenetrable. He has a prose so purple it rivals Lovecraft in its obscurity of terms and overuse of poetic turns of phrase. It’s brilliantly written, I recognise that, but it is difficult to read. The language, while flavourful, does not flow for me the way it clearly does for so many others. Every time I thought I was getting into it, I came again to a shuddering halt.

Then we have the world. The lore is only presented through Severian’s eyes, and so is coloured by his perspective. There is clearly a lot going on in the background, like an ocean of ideas. But if it is an ocean, then I’m a stone skipping over the surface. For all Severian’s conversational style, and the way Wolfe brings us into his confidence, it never felt like I was being welcomed into the world. The writing, rather than being an invitation, forms a barrier forbidding entry. Wolfe clearly wants his readers to work for an understanding, but I see no incentives to do that.

There are other problems I had too. Severian is raised by torturers, yet the torture never comes across as terribly bad. Obviously it is. People are violated, mutilated and killed, but almost exclusively this is discussed and not shown. A subject like this is one of the few where I think the old adage ‘show don’t tell’ is accurate. maybe there’s a reason for it I’m not getting, but it just feels like Wolfe is shying away from his own worldbuilding. Then is a very strnage part in the second book where a massive chunk of the narrative takes the form of a play, presented in script form. At times, it’s more like a thought experiment than a novel.

This is a shame, because the story itself is a good one. Watching a lone torturer exploring the surface of a dying planet should be interesting, and at time sit is. the characters Severian comes across in his trvaels are an interesting assortment, but none stay long enough to drag me back into the narrative before Severian is wandering again.

Ultimately, i think my main problem is one of time. The Book of the New Sun is so groundbreaking, it has spawned countless successors. And I like those successors so much more.