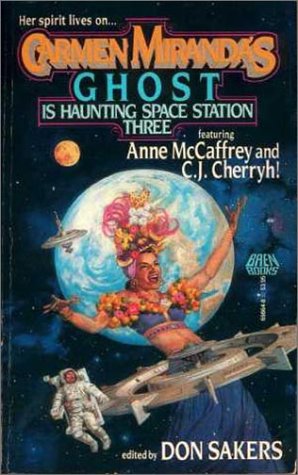 Last year, a friend shared a link to a song. “Carmen Miranda’s ghost,” the song began, “is haunting Space Station Three.” The quality was terrible, having originally been recorded from damaged cassette tape, but I was intrigued. When the playlist revealed an entire album of these weird songs, I was immediately hooked. The album had the same name as that first song: Carmen Miranda’s Ghost, but the songs were varied. Some of the tunes sounded faintly familiar, but each told a unique story. There was ‘The Bomber,’ a mournful song of world-destroying warfare, and ‘The Good Ship Manatee,’ a comical take on the weirdness of life in space. By far my favourite song was ‘Some Kind of Hero,’ a tragic tale with a sombre beat that I have stuck in my head to this day. The songs hearkened back to the Golden Age of science fiction, with ray guns and dashing heroes, but also wonderful ideas and characters you could almost believe were real. I did a bit of digging, as I always do when I find new music, and found the name of the performer: Leslie Fish. I also found the name of this weird genre: Filk.

Now, this was a word I’d heard before. Last year was also the year I first attended the LARP event Empire, and there filk is common. Modern songs twisted to incrporate elements of the game world. That to me, was all filk was. And I hated it. I hated the way it broke immersion. I hated how lazy it was, that people weren’t making new songs from scratch. And I hated how it coloured my perception of the game. I consigned filk to the dustbin of my mind, and fully expected it to stay there. And yet. . .

And yet this filk was good. It was catchy, it was real, and it was original. Filk wasn’t just boybands showing up in my quasi-medieval setting. Filk was – and is – the music of fandom. It’s a labour of love, and so I love it. Listening to these science fictional tunes is just like being at a convention. In a year like 2020, it’s the closest I’ve felt to the science fiction community. There’s more than just crackly old tapes. There are YouTube uploads, songs old and new available to the world. Some are wholly original worlds, others odes to favourite franchises. I don’t know if the boys from Jollyboat consider themselves filk, but the sheer joy of their live performances, and the community they’ve built, are exactly what filk is all about.

As I dived deeper and deeper into this rabbit hole, I found something surprising. Carmen Miranda’s Ghost wasn’t just a song and an album. There was an anthology too. released by Baen in 1990, it gathers a couple dozen stories based on Leslie Fish’s bizarre song. I hunted down a copy and read it cover to cover in a little over a day. Honestly? It’s not a very good book. I’d been hoping for stories about other songs on the album, but this was not to be. None of the stories on offer really clicked with me in the same way the music did, though it was as rich with ideas as any anthology, and the names there Anne McCaffrey, C. J. Cherryh and more, were rather more famous than I expected of this jokey little tome.

But even if this book wasn’t for me, I’m glad it exists. It’s self-aware about the silliness of it’s concept. It’s massively dominated by female authors, which came as a surprise to me. It’s stupid, it’s weird, but it’s incredibly fun. It’s a book that has no right to exist, but it does, and that is a testament to the science fiction community. We’re all just fans, and it never hurts to spread the joy around. So sing if you want, write if you can, and enjoy what the genre and its community have to offer.