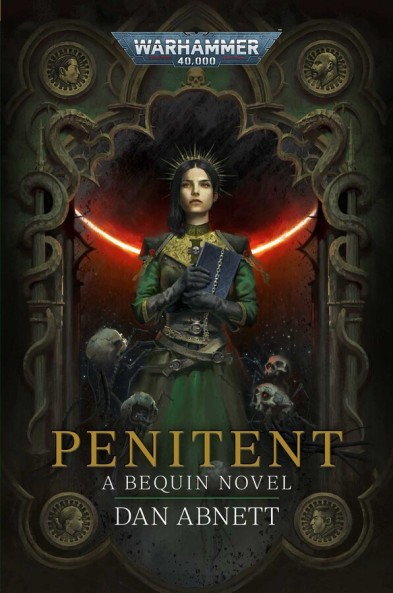 Beta Bequin continues her investigation of the ancient city Queen Mab. Torn between the warring Inquisitors Gregor Eisenhorn and Gideon Ravenor, Bequin finds herself questioning everything. But she is not the only one digging into Queen Mab’s secrets. . .

Dan Abnett’s Penitent has to be one of the most anticipated releases in Black Library’s long history. The second Bequin novel has been gestating for the best part of a decade, to the point that Abnett even went back and released another Eisenhorn novel in between volumes of the Bequin trilogy. The 2021 Black Library Celebration saw Penitent‘s release after nine long years of waiting. As a reader only just getting back into the literature of the forty-first millennium, I did not have to endure nine years of waiting. In fact, it wasn’t even nine days. But still the question remained: How would the book hold up with such a long gap between releases? Could it possibly live up to the hype generated by legions of fans?

Put simply, yes. yes it absolutely can. Maybe it’s because I didn’t have that wait, but Penitent reads as if there has been no gap between books. Those nine years are reflected in the page as a mere two months, and after a brief and well-handled recap, we are thrown straight back into the murky tangle of conspiracies that Abnett’s readers have come to know and love. The flow between the two books would be impressive on any release schedule, but to so effortlessly bridge a near-decade shows just how good Abnett is at what he does. This is a man at the peak of his craft, and Penitent is easily up there with the best of Black Library’s output.

Penitent is a book that hits the ground running and throws wonder at the reader with unceasing glee. There is so much going on here that I couldn’t begin to cover it all. Abnett mines the world of Warhammer 40,000 for all it is worth, turning up all manner of gems in the process. Though it’s evidently the product of decades of storytelling, I dare say fans of anything the grim, dark future has in store will be appeased by this blood-soaked offering. The presence of Inquisition, Traitor Space Marines, heretics and the like are expected, though not always in the form they take here, but surprises abound as it becomes clear just how high the stakes are in this book. There are revelations held within these pages that could change not just the Bequin series, but the entirety of the forty-first millennium. Secrets pour out right up until the very final line, and this is one the dedicated fan will not want to miss.

Penitent, and the Bequin trilogy, is a testament to the great storytelling that can come from the unfairly maligned realm of tie-in fiction. This isn’t just a good Warhammer 40,000 book, it’s a good book. Full stop. Hopefully the final instalment in Abnett’s magnum opus releases before another nine years elapse, because I for one cannot wait to see where this goes next.

One thought on “BOOK REVIEW: Penitent, by Dan Abnett”