Hold up, this is a Sequel! You can find my review of the previous book by clicking this link. 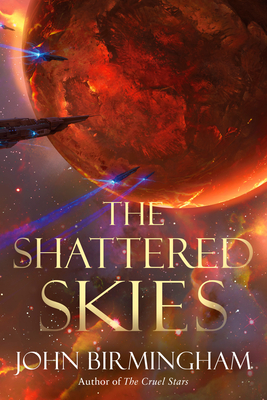 The Sturm have returned to Volume space, bringing their mission of conquest and genetic purity to the human race. All that stands in their way is a loose coalition of former enemies, and one very angry Scotsman . . .

If The Cruel Stars was all build-up, then The Shattered Skies is the payoff. And it’s payoff delivered in style. This is action-packed space opera at its most breathless. An explosion every other page, and a flurry of new developments to reckon with. Like all good middle-of-trilogy books, John Birmingham’s latest puts its protagonists through the wringer emotionally as well as physically, and builds on existing conflicts while also throwing some fresh spanners into the works.

The Sturm (or the Human Republic) are a great villain. On the one hand, they are the evil warmongers we see an awful lot of in science fiction. In fact, the word Nazis is thrown around liberally. But there is a depth to them that hints at something more. You see, their central belief is that humans shouldn’t go tinkering with our own genome. And that’s a very valid concern. Personally, I think we have to be very careful when it comes to this sort of thing. In a world that has edited human genetics already, the temptation is there. Can we change what a human is? Yes. Yes, we can. But should we? Maybe not. And in Birmingham’s world, where you can upload your mind to a killer robot, or grow a rhinoceros horn on your head for largely aesthetic purposes, the question must be asked even louder. At what point is a person no longer truly human? But while the underlying concerns are valid, there can be no denying that the Sturm take their response too far. After all, an army demanding genetic purity of its subjects and brutally killing those who fail the test is hardly likely to be the heroes.

The heroes are, as you’d expect, more diverse, ranging from a young princess to a centuries-old general. And Birmingham gets the most out of his characters. Frazer McLennan is the most memorable of these creations, though not always for good reason. The Scottish general is at his best when making tactical choices, or in his few quiet moments. But when he speaks, a solid fifty percent of his dialogue is profanity.  For me, Birmingham pushes this tic too far, landing McLennan in the realm of absurdity. The odd expletive-laden exchange with artificial intelligence Hero is funny, but it’s a shtick that grows tired fairly quickly. On the more innocent end of the spectrum, Princess Alessia manages to join the hallowed ranks of non-annoying preteen protagonists. Her wide-eyed naivety is a perfect lens through which to show the world. And what a world it is.

Birmingham is clearly a fan of science fiction. There are a handful of references to Star Trek and Star Wars, acknowledged as classical tales. And while the overall setting doesn’t push the boat out too far in terms of originality, it mixes familiar elements and innovations just the right amount. This isn’t the sort of book you’d go to in search of profound musings on the nature of existence, but it is deeper than it first appears. And even though we’re taken through at breakneck speed, it’s a very fun journey. There are a lot of elements that are worthy of further exploration, but in pure entertainment value, The Shattered Skies does exactly what it needs to do.

I received a free copy of this book from the publisher in exchange for an honest review.

Did you enjoy this book? If so, you may also like:

One thought on “BOOK REVIEW: The Shattered Skies, by John Birmingham”